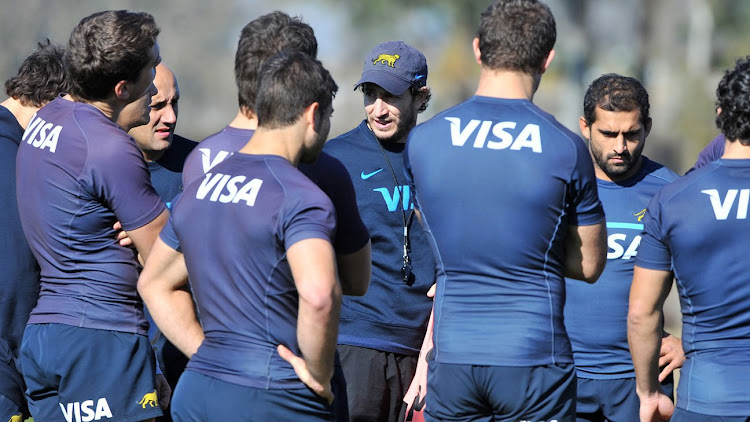 The Pumas of Argentina will be aiming to go top of the Tri-Nations table with a win over Australia.
Image: ARGENTINA RUGBY UNION/ TWITTER

Former Australia boss Michael Cheika said he could never coach against his old side but will do just that when he takes a seat in the Argentina box on Saturday and plots the Wallabies' downfall in the Tri-Nations.

A year after quitting Australia following a disappointing Rugby World Cup, Cheika donned a blue polo shirt and joined head coach Mario Ledesma at Western Sydney Stadium last week to guide the Pumas to a first ever win over the All Blacks.

The 25-15 triumph had Ledesma and his players in tears, and Cheika was praised by gladiator-captain Pablo Matera for convincing the side they could beat the battle-hardened All Blacks.

Ian Foster said after the loss to Argentina on Saturday that he was not feeling under any great pressure but the morning papers back home in New ...
Sport
10 months ago

Emotions will be soaring again at Hunter Stadium on Saturday as Cheika faces the nation he took to the 2015 World Cup final before it all went sour in his final years in charge.

“I think (he will be nervous)," said Ledesma, who coached against the Pumas when he was in charge of Australia's scrum.

“I was in his place a few years ago and it's never easy. He's a very proud Australian and he's not going to change.”

Wallabies players spied Cheika's 'DNA' at work in Argentina's win over the All Blacks, and at times there were echoes of his past teams when the Pumas attacked with vigour.

Yet there was little evidence of the Randwick enforcer in the Pumas' kicking game - or their willingness to kick for three points rather than push for rousing team tries.

“They kicked the leather off the ball, I'm assuming he didn't have a lot of influence in that,” Australia head coach Dave Rennie remarked drily in a conference call with reporters on Thursday.

The Springboks remain top in rugby rankings, All Blacks slip to third

Three-times world champions New Zealand have slipped to third in the World Rugby rankings after their shock defeat by Argentina in the Tri-Nations ...
Sport
10 months ago

The challenge for Argentina will be how to rise again after the emotional breakthrough of beating the All Blacks, to scalp another top-tier rugby nation and take top spot on the Tri-Nations table.

Ledesma kept faith with the same starting 15 and gave them a lighter week at training.

“Obviously it was emotionally and physically draining and we were not used to playing at that kind of intensity for several months now,” he said on Thursday.

An Australia win would also put the Wallabies top of the table after their 24-22 victory over the All Blacks in Brisbane.

After a draw and two big defeats against the All Blacks, the Lang Park thriller was Rennie's first win in charge and a tonic for the weariest of Wallabies fans.

However, it would all count for little without another win on Saturday, said Rennie.

We want the Australian public to believe in us and to be proud of us. And the only way you do that is through performance

“We want the Australian public to believe in us and to be proud of us. And the only way you do that is through performance,” he said.

The Wallabies are right to look forward rather than back, particularly for Newcastle.

In the only other test to have been played in the port city, Australia were upset 9-6 by Scotland in 2012 on a filthy night of driving rain and howling gales that led to former captain David Pocock getting treatment for hypothermia.