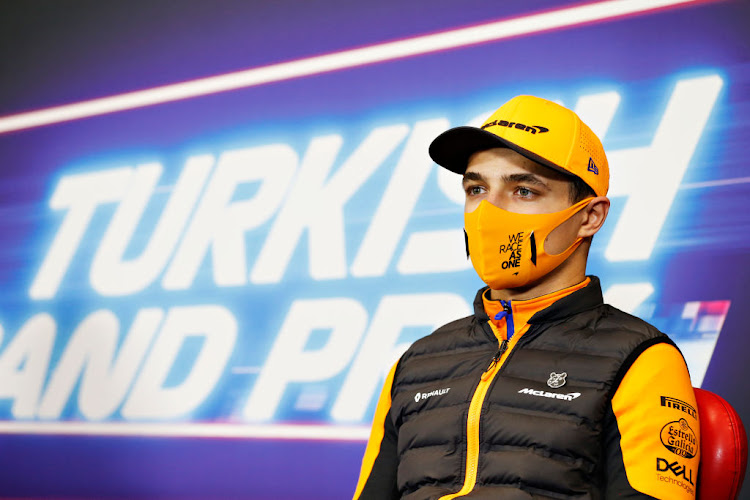 Lando Norris of Great Britain and McLaren F1 talks in the press conference during previews before the F1 Grand Prix of Turkey at Intercity Istanbul Park on November 12, 2020 in Istanbul.
Image: GETTY IMAGES/ ANTONIN VINCENT

McLaren's Lando Norris spoke on Thursday of the anxiety and nerves he suffered in his 2019 Formula One rookie campaign and said the sport needed to talk more openly about mental health.

The Briton, who turned 21 last week, made a strong start to this season with third place in Austria as well as fastest lap, but it was a different story last year when he came in as a teenager.

Norris, who has built a sizeable following through his esports engagement and playful personality, said he had put on a brave face.

“I might have looked like the new kid on the block full of confidence and enthusiasm but that really wasn't the case,” he said on a blog published on the McLaren team website (www.mclaren.com) to mark International Men's Day.

“I covered up that I was struggling a lot with nerves and anxiety.

“Despite making it to F1, something I had dreamt of ever since I began racing, I found myself questioning my own self-belief: worrying if I had what it took, comparing myself with my team mate and other drivers.

“It screws with your head. It’s tough to deal with and I'm sure many other drivers have struggled with it in the past.”

Norris said nobody wanted to give rivals an edge by showing weakness, but that meant “we don’t talk about mental health as much as we should - and we really should”.

Seven-time Formula One world champion Lewis Hamilton says he is confident his sport has a bright and more diverse future but he will not take his ...
Sport
6 months ago

Norris is eighth in the 2020 championship with one point less than Ferrari-bound team mate Carlos Sainz.

The Briton said he had used a mind coach for several years until the end of last season.

“This year I felt confident enough to take more responsibility for my own mental health,” he said. “I think it’s all part of the growing process.”