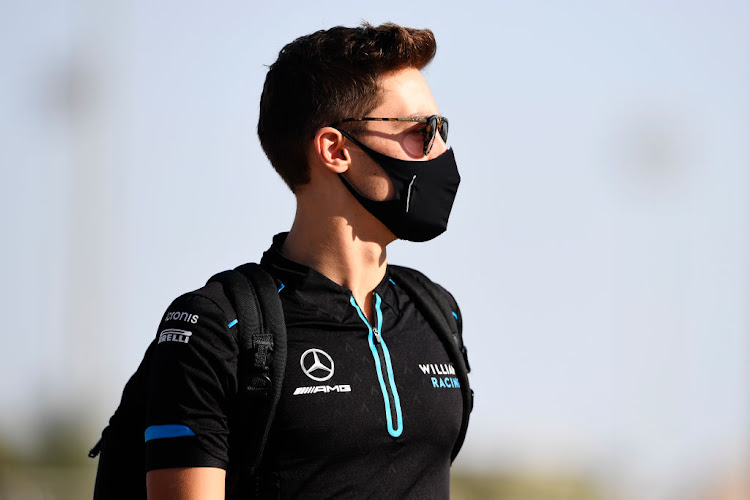 George Russell walks in the Paddock during previews ahead of the F1 Grand Prix of Bahrain on November 26 2020. The Williams driver will replace Lewis Hamilton for Mercedes this weekend after the world champion was ruled out with Covid-19.
Image: Rudy Carezzevoli/Getty Images

George Russell has yet to score a point in nearly two seasons in Formula One but the Briton will step into a winning car in Bahrain this weekend as Lewis Hamilton's replacement at Mercedes.

They are huge shoes to fill for the 21-year-old Williams driver who has a long-term Mercedes contract — but Russell is ready to seize the opportunity after Covid-19 ruled out his compatriot.

Replacing the most successful driver in the history of the sport, a seven-times world champion with 11 wins already this year, at the dominant team on the grid is some challenge.

Russell has long been tipped as a future Mercedes driver — either when Hamilton retires or the team lose faith in Finnish teammate Valtteri Bottas — and now has the chance to really show what he can do.

The 2018 Formula Two champion has wrung every last bit of performance out of an uncompetitive car at tail-enders Williams — boasting a 36-0 qualifying record over teammates Robert Kubica (2019) and Nicholas Latifi (2020).

The Schumacher name will return to Formula One next season with Mick, son of Ferrari great and seven-times world champion Michael, announced on ...
Sport
1 year ago

Beating Bottas in qualifying will take some doing and his every move will be under a new level of scrutiny.

The pressure will not be as great as it could have been, however, because Mercedes have already won both championships for an unprecedented seventh year in succession and there is nothing at stake for them.

But it will still be there for Russell.

Mercedes will want to compare his performance to Bottas, who is fighting Red Bull's Max Verstappen for second place in the championship, in equal machinery and in race conditions with a view to the future.

Bottas also knows there are considerable downsides for him — being punished by Hamilton regularly is one thing but losing to an up-and-coming youngster would be a far greater setback.

Mercedes had a reserve driver available in Belgian Stoffel Vandoorne, a former McLaren racer now competing in Formula E, but Russell got the nod not just as a future star but for his current level of experience.

Nikita Mazepin to race for Haas F1 next season

Russian driver Nikita Mazepin will race for Haas in 2021 after agreeing a multi-year deal, the US-based Formula One team announced on Tuesday
Sport
1 year ago

As Mercedes team boss Toto Wolff explained, the Briton is race-ready and knows all about the 2020 Pirelli tyres and how they perform. He also enables Mercedes to turn a negative — their star driver's sudden absence — into a potential feel-good story about a rising talent.

“George has shown impressive form this year with Williams, playing an instrumental role in their climb up the grid,” said the Austrian. “I am optimistic that he will deliver a strong performance alongside Valtteri, who will be a demanding reference for him.”

Russell will be the first driver to graduate from the Mercedes junior programme to the works team and also only the third Briton to drive for them in the Formula One world championship after Hamilton and the late Stirling Moss.

“I see this as a great chance to learn from the best outfit on the grid right now and to come back as an improved driver, with even more energy and experience to help push Williams further up the grid,” he said.

“Obviously, nobody can replace Lewis, but I'll give my all for the team in his absence from the moment I step into the car.”