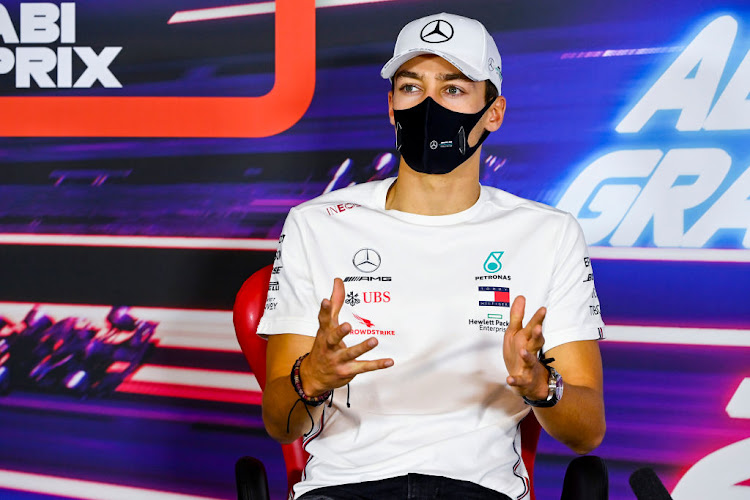 George Russell is waiting to hear whether Lewis Hamilton, still isolating in Bahrain, can race at Yas Marina after testing positive for Covid-19. If he can't, Russell will replace him for Mercedes.
Image: Mark Sutton - Pool/Getty Images

George Russell has dampened speculation of an early move to Mercedes after his impressive performance as stand-in for seven times world champion Lewis Hamilton.

The 22-year-old Briton fuelled some chatter when he said in Bahrain last Sunday that he hoped he had given Mercedes team boss Toto Wolff a selection headache “not just for 2022, maybe sooner”.

“That was just a throwaway remark in the heat of the moment,” Russell told reporters at Formula One's season-ending Abu Dhabi Grand Prix on Thursday. “Obviously emotions were high and what have you. I have a contract and am a Williams driver for 2021.”

Valtteri Bottas is out of contract at the end of next season, when Mercedes-managed Russell will be firmly in the frame for a move.

The youngster is still waiting to hear whether Hamilton, still isolating in Bahrain, can race at Yas Marina after testing positive for Covid-19.

“We’re still waiting to get Lewis’s results back. For now we are going ahead as planned. If Lewis returns with a negative result, he will be back in the car,” he said.

Formula One champions Mercedes have fixed a radio problem that caused pitstop confusion in Bahrain last weekend and wrecked their race, team boss ...
Sport
1 year ago

Russell arrived at the track in Mercedes kit and got down to work with the engineers for the usual preparation. He said there was plenty to do.

“Last Friday was all about learning, taking in all the information, learning the procedures,” he said of stepping in at short notice in Bahrain, a race he led before being denied a first win by pit stop confusion and a puncture.

“This Friday will be about improving the car, tuning the set-up to my driving,” he said. “My engineers have already understood my way of working, my way of driving and we can try to tailor the car more to my needs.

“Last week was just running with Lewis’s set-up which is obviously a very good baseline but I’m not Lewis and I have slightly different needs to extract more from myself and the team.”

Formula One world champion Lewis Hamilton said he hopes to return for the season-ending Abu Dhabi Grand Prix after one of the hardest weeks of his ...
Sport
1 year ago

Russell said minor modifications had been made, including on the steering wheel, but more was needed for him to feel comfortable though everything should feel more natural second time around.

“The adrenaline of driving this car and fighting for victories allows you to power through the pain,” he said.

The Briton revealed also that his mother and sister were in tears after the race.

“We live this together, this sport, and it’s so passionate. Emotions are so high and this was my first opportunity not just to win but to actually score points. That was such a big difference,” he said.

“Having that taken away from us not once but twice was difficult. But having time to reflect on the weekend, I’ve left with my head held high and proud of the job we managed to achieve.”