Warriors too good for Cobras 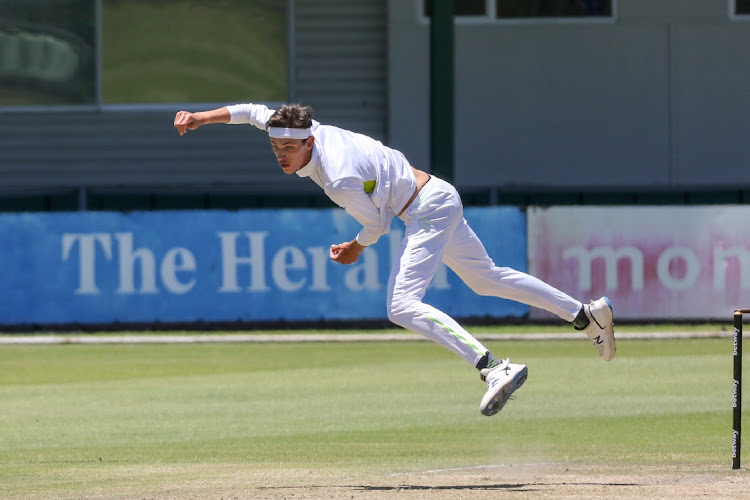 ON THE WARPATH: Warriors seamer Marco Jansen delivers the ball on the final day on Wednesday of the CSA 4-Day Domestic match at St George’s Park
Image: WERNER HILLS

The Warriors’ bowling attack all chipped in on the final day as the home team completed an important 80-run victory over the Six Gun Grill Cape Cobras in their CSA 4-Day Franchise clash at St George’s Park in Port Elizabeth on Wednesday.

Cobras batsman Janneman Malan scored a 10th career half-century but that was not enough to stop the Warriors from claiming their second win in their five matches so far this campaign.

It was an admirable comeback in the game as they had trailed the visitors by 61 runs on the first innings.

The win has also kept the Eastern Cape franchise in contention for trophy honours with two matches to play.

Resuming the final day on 82 for three, the Cobras faced a tough task as they needed another 183 to win with seven wickets in hand, with Malan (44) and Kyle Verreynne (6) taking up the cudgels.

Verreynne could only add five runs to his overnight tally before left-arm seamer Marco Jansen made the breakthrough in the morning session, removing the Cobras gloveman for 11, caught behind by Sinethemba Qeshile.

Having won only one out of the matches they have played so far this season, Peterson remained adamant they can turn the tide as they go in pursuit of ...
Sport
11 months ago

Malan brought up his half-century in the 40th over with his side still in the hunt on 96 for the loss of four wickets.

However, when Malan’s wicket fell, in the 48th over, it began a mini collapse which saw the visitors lose their last five wickets for just 69 runs, and they were dismissed for 184.

The top-order batsman’s 65 was scored off 116 balls and included eight fours and a six.

Aviwe Mgijima was the next man in, making 19 off 66 balls before being bowled by a Glenton Stuurman delivery that kept low a few overs before lunch.

Spinning allrounder George Linde played a brief cameo in scoring 19 before he was well caught by Matthew Breetzke with the Cobras on 149.

Imran Manack hit one maximum on his way to 19 before he was trapped leg before wicket by left-arm spinner Jon-Jon Smuts.

Akhona Mnyaka was the last wicket to fall, caught by Gihahn Cloete at first slip off the bowling of Smuts.

We still have a chance in four-day series, says Vallie

Warriors captain Yaseen Vallie says a few wins could put his side right back in the hunt for a finals berth in the CSA 4-Day Franchise series. ...
Sport
11 months ago

Smuts ended with match figures of six for 87 in 32.5 overs including 12 maidens, while Basheer Walters, Stuurman and Jansen picked up four wickets apiece in the match.

Rudi Second was named the man of the match for some splendid work with the bat, as he helped his side stay ahead of the curve with a first innings 55 to go with his 114 in the second innings.

The Warriors’ next assignment sees them welcome the Hollywoodbets Dolphins to St George’s Park from Sunday.

They then travel to face the Cobras in the new year for what will be their final round-robin fixture.

In the other match that finished on Wednesday, the VKB Knights were comfortable nine-wicket winners over the Imperial Lions after having to chase down a mere 18 runs for victory in their second innings.