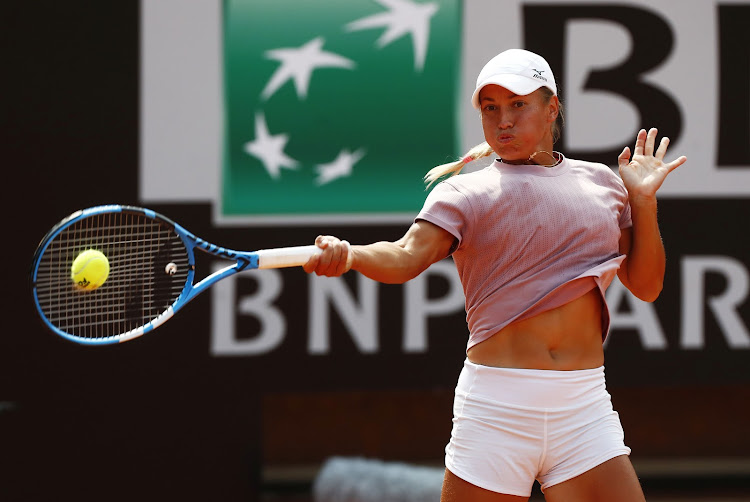 Yulia Putintseva of Kazakhstan has complained about mice in her room during quarantine.
Image: GETTY IMAGES/ ANGELO CARCONI

Australian Open players have been told not to feed mice at their quarantine hotel in Melbourne after world number 28 Yulia Putintseva complained she could not sleep for the rodents scurrying around her room.

The Kazak swapped rooms earlier this week after finding a mouse but said her new room was also infested. She shared a video of a mouse jumping out from behind a closet on social media.

Victoria state police minister Lisa Neville said on Wednesday authorities would take care of pest control but suggested there might be more to the story.

"As I understand there may have been some feeding going on," she told reporters, without revealing the source of her information.

"I'd just encourage them to minimise interaction with the mice, we will keep doing pest control if we need to, but hopefully that pest control work that was done this week will have fixed the problem."

it’s actually a lot of them! Not even 1 in my room now🤦🏼‍♀️ pic.twitter.com/uUaicOhoB5

More than 70 players and their entourages are confined to their hotel rooms for 14 days and unable to train for the February 8-21 Australian Open after passengers on three charter flights returned positive tests for the novel coronavirus.

Putintseva said her new room had more mice than the old one.

"It's actually a lot of them! Not even 1 in my room now," she wrote on Twitter.

She added that reception had told her the hotel was full and that they could not help her.

On Instagram, Putintseva also complained of not being able to open windows in her room. She held up a sign saying: "We need fresh air to breathe."

A number of players have complained about the conditions, drawing a fierce backlash from Australians, with thousands of the nation's citizens remaining stranded overseas due to Covid-19 travel restrictions.

However, Australian Open tournament director Craig Tiley on Tuesday said "the vast majority" of players were supportive of the strict protocols.

Meanwhile, two more Australian Open players have tested positive for Covid-19, government officials said on Wednesday, as authorities were at cross-purposes over who would pay for the tournament's quarantine bill.

'No room to swing a racket': player shares lockdown life ahead of Australian Open

As one of the 47 tennis players forced into a hard isolation ahead of the Australian Open, New Zealand's Artem Sitak may be bouncing off the walls of ...
Sport
3 months ago

A total of 10 people associated with the Grand Slam, including four players, have now tested positive for the virus.

The has been some confusion over the exact numbers, with authorities' test results later being reclassified as "viral shedding" from previous infections.

The viral shedders are not contagious.

Neville said authorities were "very confident" one of the two new player infections was a case of viral shedding.

"Of the other two, it's less clear that they're shedding. That will be worked through, and that's one player and one support person," Neville told reporters.

More than 70 players and their entourage are confined to their hotel rooms for 14 days and unable to train for the February 8-21 Australian Open after passengers on three charter flights returned positive tests.

Authorities have shelled out huge funds to fly over 1,200 players, coaches and officials on 17 charter flights to Australia to put on the year's first Grand Slam.

Tiley said quarantine costs may exceed A$40 million, part of which would be covered by the state government of Victoria.

"The state government are supporting and assisting that," he told radio station 3AW on Wednesday.

"I've triple-confirmed that again today, it is fully funded by the Australian Open," she said.

"The taxpayer is not contributing to the (Australian Open) hotel quarantine program."