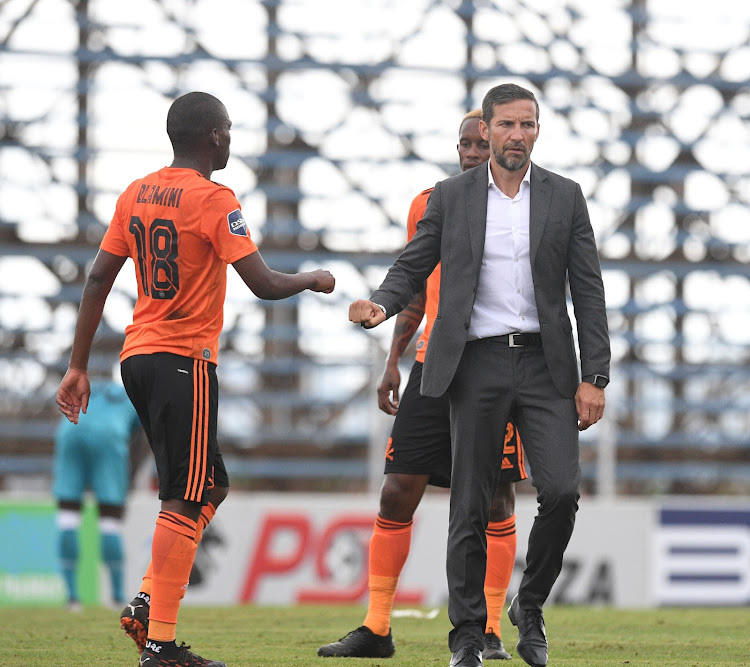 Josef Zinnbauer says if players are ready to play a role and they fit into his tactical plan for a match‚ they will be fielded regardless of age. This follows Orlando Pirates handing a debut to 18-year-old Ayanda Tshobeni against Maritzburg United on Saturday.

Youth product Tshobeni put in a good shift in Pirates’ 1-0 DStv Premiership win against Maritzburg at Harry Gwala Stadium‚ working hard and showing skills and an ability to carry the ball forward playing in midfield alongside Thabang Monare.

Started by coach Zinnbauer‚ the teen displayed calmness and maturity on the ball beyond his 18 years in his 77 minutes before being replaced by Siphesihle Ndlovu.

Zinnbauer said he was happy with the contribution of the teen‚ as he has in the past two games by that of influential 23-year-old left-back Bongani Sam.

“We said this before — we said that all players will give us a good performance and it’s important as a coach that you follow the tactical [necessities]‚ and what we need in the plan and need in the game‚” the Bucs coach said on Tshobeni’s showing.

Chiefs coach Hunt insists Pirates are the furthest thing from his mind: 'I don’t even think about the derby'

The Soweto derby is the furthest thing from Kaizer Chiefs coach Gavin Hunt's mind and he insists that he is not thinking about the looming date ...
Sport
1 year ago

“With Azola‚ he understands what we want. Sam does also‚ but Sam was always injured — he was not always available. Now is the first time in my time [as coach] that he has been available for 90 minutes. And now I hope we get the good recovery‚ and Azola also.

“I’m happy about both of these players.”

Tshobeni was a product of Pirates development head Augusto Palacios’s personal academy — the Augusto Palacios Apprentice Academy — from 14‚ and joined the Bucs youth structures at 16.

He was promoted to the Buccaneers’ senior team from their DStv Diski Challenge reserve side in the 2020-21 preseason along with 20-year-old midfielder Thabiso Sesane.