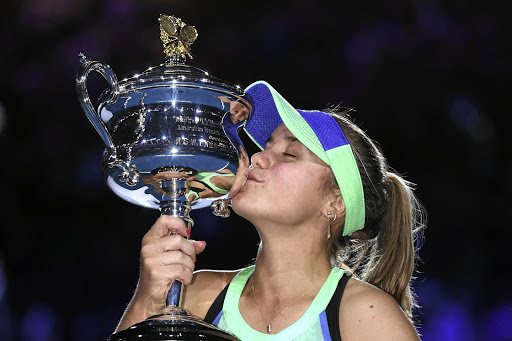 American Sofia Kenin has proved she is no flash in the pan following her maiden Grand Slam triumph at last year's Australian Open but the prospect of defending that title has got the world number four's nerves jangling.

Kenin, 22, defeated world number one Ash Barty in front of her home crowd in the semi-finals en route to the title at Melbourne Park and then won in Lyon to climb to her career-best ranking of fourth.

She followed up those titles with a fourth-round appearance at her home Grand Slam, the US Open, and then reached the final of the rescheduled French Open in September to be nominated as the WTA player of the year.

Yet she has never defended a Grand Slam title before and that has made Kenin edgy.

I feel like it's going to be a little bit of a rollercoaster next Monday or Tuesday, whenever I play

“I feel like it's going to be a little bit of a rollercoaster next Monday or Tuesday, whenever I play,” Kenin told reporters this week ahead of the Australian Open.

“I feel like you guys, the fans, will see a little bit more emotions. Now it's a little bit quiet, trying to get into the rhythm. I'll somehow have to figure out a way to handle nerves for next week.

“It's the first time I'm experiencing coming back to a Grand Slam where I have to – not have to, where I want to try to defend my title. Of course, there are nerves.”

Kenin was not considered a realistic contender the last time she played at Melbourne Park, but the American will have a target painted on her back when the year's first major kicks off on Monday.

She has been error-prone in the few matches she has played this season, including at the WTA season-opener in Abu Dhabi where she exited in the quarter-finals as the top seed.

Coco Gauff was rusty on serve and struggled to produce her best tennis but the American prodigy prevailed 6-3 6-7(6) 7-6(5) over Swiss Jil Teichmann ...
Sport
2 months ago

Kenin has often shown her frustration on court by slamming rackets and shedding tears during high-pressure moments but the Russian-born player feels she has become stronger mentally.

She has said she will not hesitate to ask eight-time Australian Open winner Novak Djokovic for a word of advice about defending major titles but feels her performances last year give her “some air to breathe” when it comes to expectations.

“I feel like with the matches I've had, the success I had last year, helps me,” Kenin said. “After who wins a Grand Slam, of course people are going to be looking at them. That's why I'm a little bit nervous for next week.”