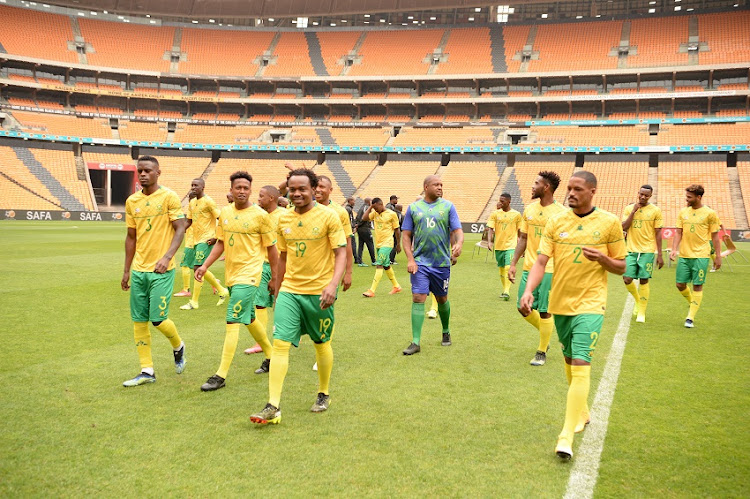 Bafana Bafana coach Molefi Ntseki has managed to salvage a relatively strong squad amid the chaos wreaked on teams by European clubs not releasing players for the final two rounds of the 2021 Africa Cup of Nations qualifiers.

But, with notably Bongani Zungu, Dean Furman and Thulani Serero absent, the coach will have to put out a combination where some previously fringe performers get headline roles in Thursday’s Group C match against Ghana at FNB Stadium (kickoff 6pm).

Bafana coach Ntseki faces another headache: 'Ghana will be coming here with a different team altogether'

Bafana Bafana coach Molefi Ntseki’s own squad plans have not just been thrown into disarray by European clubs refusing to release players‚ but also ...
Sport
3 weeks ago

TimesLIVE examines the coach’s options (we have gone with a high-pressing 4-3-3 as our formation):

The easiest position for Ntseki to resolve – Ronwen Williams is in possession, was excellent bar one crucial mistake at the 2019 Nations Cup in Egypt, and in superb form for SuperSport United. Itumeleng Khune and Veli Mothwa are the back-ups.

Thapelo Morena seems likely to edge out Craig Martin, Lebohang Maboe (who may be employed in a more advanced role) and Thibang Phete. Converted Cape Town City fullback Martin may get a shout though.

With Orlando Pirates’ Innocent Maela having dropped out, injured Swallows FC’s Sifiso Hlanti has the necessary experience and physical presence for such a match.

Siyanda Xulu arrived in time for just one training session, so captain Thulani Hlatshwayo and the solid Mamelodi Sundowns performer Mosa Lebusa would appear the perfect right- and left-footed combination.

Bafana Bafana coach Molefi Ntseki has questioned the apparent Afro-pessimism from European clubs that has seen squads across the continent decimated ...
Sport
3 weeks ago

Andile Jali – it has to be noted that when the multi-skilled and now hugely experienced Sundowns man is in the Bafana starting XI they often get a positive result.

Rivaldo Coetzee – in superb form for Sundowns in the position he was converted to from centreback last season. His robotic precision in positioning can be decisive breaking attacks and protecting the back four. Plus he has an eye for a pass or a linking situation.

Luther Singh – has scored three goals in three games for Pacos de Ferreira in Portugal and this match can be the ideal time for the slow-burning career of this emerging talent to hit afterburn for the senior national team.

Percy Tau – he is match rusty, having last played for Brighton on February 10, but also has the destructive potential to wreak havoc unleashed from the frustrations of his lack of game time in the English Premier League. Wants to send a message to Brighton manager Graham Potter. Perhaps Bafana’s most important player on the field.