Bafana scorer Percy Tau: ‘We did our best — people may not understand how hard we try’ 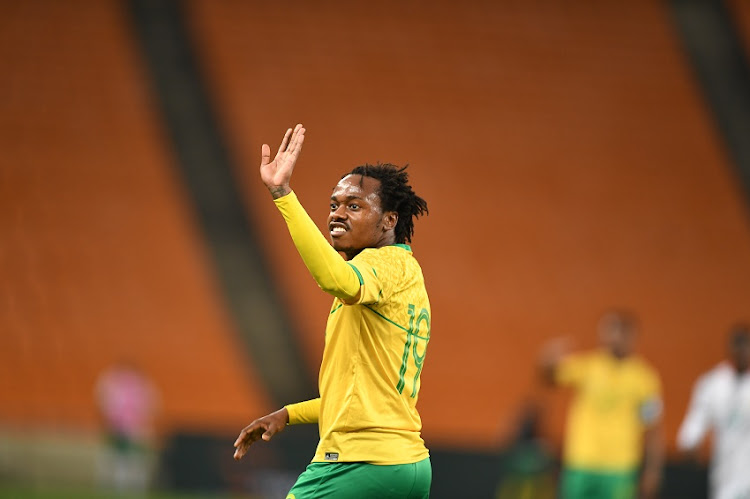 Percy Tau during the Africa Cup of Nations Qualifier match between SA and Ghana at FNB Stadium on Thursday.
Image: Lefty Shivambu/Gallo Images

Bafana Bafana forward Percy Tau is pleading with South African football lovers to understand that the national team are doing their best under difficult conditions to qualify for the Africa Cup of Nations (Afcon) in Cameroon next year.

With one match remaining in Group C against Sudan at the Al-Hilal Stadium in Omdurman on Sunday‚ Bafana have not yet achieved their minimum requirement of securing qualification for Afcon and pressure is mounting after their 1-1 draw against Ghana at FNB Stadium on Thursday evening.

A draw against Sudan‚ who will have a small number of fans inside the stadium to cheer them on‚ will be enough for Bafana to progress but defeat will see SA crash out spectacularly at the final hurdle.

“We did our best — people may not understand how hard we try but we hope that they do because we try hard to win games‚” said Brighton and Hove Albion attacker Tau‚ who scored the 52nd-minute equaliser against Ghana.

“It is difficult in these times of Covid-19 but we are looking forward to the next game in Sudan. We didn’t have enough days to prepare but we reacted well and it can only get better.”

Bafana Bafana edged Ghana, but missed chances, in a 1-1 draw at FNB Stadium on Thursday evening and now know beyond doubt that a win or draw in their ...
Sport
3 weeks ago

Bafana had just three training sessions on Monday‚ Tuesday and Wednesday before meeting Ghana‚ and‚ like the Black Stars‚ were depleted by European clubs declining to release players over Covid-19 concerns.

Tau was asked about the difficult circumstances all national teams have faced on the back of a global pandemic that wiped out much of the regular international football calendar in 2020‚ resulting in matches coming far apart and struggles in building any form of rhythm‚ and whether he felt SA fans fully understood such challenges.

The forward said he believed Bafana put together a convincing enough performance against Ghana‚ bar failing to take more chances.

“It is a fair result but we would have loved to win the match at home. They scored first and we had to react to that but we couldn’t get the second goal [after Tau’s equaliser] — but I will take a draw going into the next game.

“The first half we played well and in the second there were 15 minutes where they were dangerous after they had time to look at our system. I think they played with an extra man in the midfield and that changed the dynamics of the game‚ but we managed to hold on and created chances in the closing stages of the match.

“I am proud of this group of players‚ I think they did everything that was expected of them and we played a different system [3-4-3]. We didn’t have some of the guys but those who were here did well and it will be lovely to play in front of fans again in Sudan.”

If Bafana pull off a win in Omdurman‚ they will complete a double over the Falcons of Jediane whom they beat in the second round of the qualifiers at Orlando Stadium through a lone goal by Lebogang Phiri.