Chance to give CJ Stander the perfect farewell 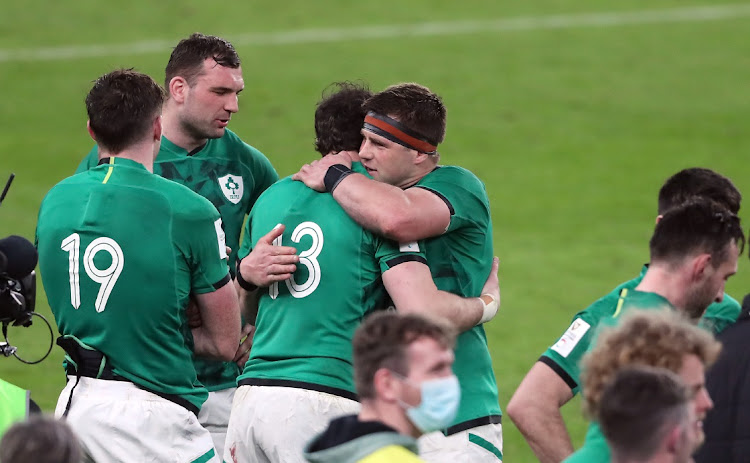 WINNING SIDE: CJ Stander of Ireland congratulates Robbie Henshaw after the team won their Guinness Six Nations match against England at Aviva Stadium on Saturday in Dublin, Ireland. Stander, who has announced his retirement from rugby at the end of the season and his intention to return to SA, plays for Munster in the upcoming PRO14 final on Saturday
Image: Pool/Getty Images/Niall Carson

Munster go into Saturday’s PRO14 final against Leinster knowing full-well that they are underdogs, but the desire for success, and the opportunity to give South African-born stalwart CJ Stander the perfect farewell will be the driving force behind their final hopes.

Leinster are a mountain to climb for any team, especially as Leo Cullen’s side has amassed 71 from a possible 80 points in PRO14 action, and have been the nemesis that have beaten Munster five consecutive times — and in three consecutive semifinal stages.

Munster last won any silverware a decade ago, when only Keith Earls and Conor Murray of the current crop were in the side that beat Leinster 19-9 on the day.

But there is a hope that things might be different this time around. South African coach Johann van Graan has slowly built a tough Munster machine, one that lost 13-10 to Leinster in the pool stages last time out.

There is a sense they are getting closer, but whether it will be close enough is another thing altogether.

Still, the impending retirement for Stander, who has played more than 150 games for Munster since joining from the Bulls in 2012, will spur them on. Ireland gave Stander the perfect Test send-off with their win over England, and now Stander gets a chance to get the perfect PRO14 send-off as well.

The Cheetahs‚ still angered by their exclusion from next year's newly revamped PRO16 competition‚ believe South Africa's entrants must be determined ...
Sport
4 months ago

Van Graan praised the work ethic of Stander this week, saying he turned up on Monday just wanting to contribute to the side’s campaign.

“He came in on Monday and said it's a massive game for the club — and it's never been about him, it's always been about the club,” Van Graan said.

“His character speaks for itself in terms of that and look, it would be great to win this game for a whole lot of reasons, and one of them will be CJ.”

Stander has been a big part of Munster’s resurgence over the past few years and has given his all whatever the game or conditions.

This is why there is a tinge of emotion surrounding his appearance, even though it won’t be the last game in the red jersey for Stander.

“CJ's been fantastic for Irish and Munster rugby, he's played over 150 games for the club and we've got a final to look forward to,” Van Graan said.

Leinster are odds-on favourites, despite the rare loss to Ospreys last weekend.

They are a team that knows how to win and have won the last three PRO14 titles. All indications are that they will lift the trophy again.

But there is hope that Munster can pull out something special if they get their game right.