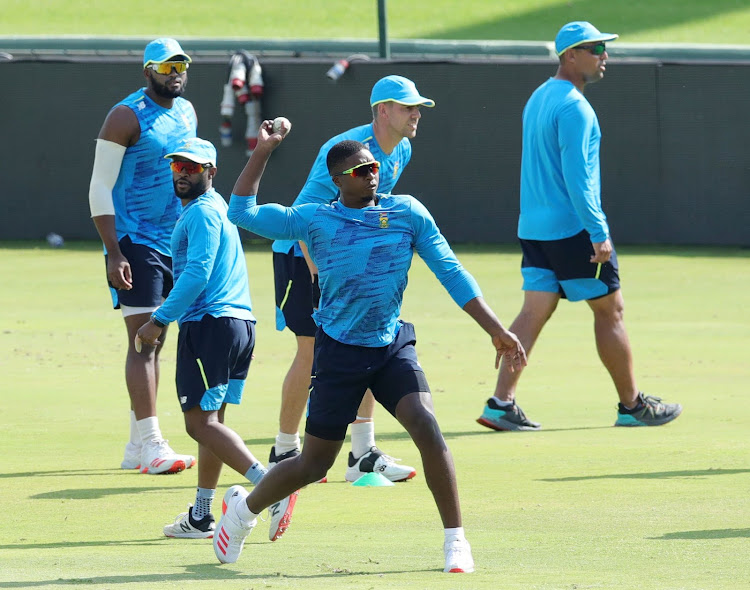 KEEPING FOCUSED: SA's Lutho Sipamla throws the ball under the watchful eye of captain Temba Bavuma during a training session on Monday at the SuperSport Park Stadium
Image: BACKPAGEPIX/SAMUEL SHIVAMBU

Temba Bavuma on Monday officially embarked on his quest to achieve what no other SA captain has in 30 years of trying — win a World Cup.

SA fans will not be fussy after three decades — T20 or 50-over silverware will do.

Bavuma was named three weeks ago as SA’s first black captain and was given the job until 2023.

And he knows just how tough his task will be over the next few months as he attempts to build a solid, consistent unit that can compete against the big guns of world cricket.

Senuran Muthusamy claimed four of the remaining six wickets required as the Dolphins drew the curtain on the franchise era by surging to the 4-Day ...
Sport
2 weeks ago

Speaking in his first media conference as captain and ahead of two white-ball series against Pakistan, Bavuma cut a determined figure and spoke with the kind of authority that suggested he had been at the helm for years.

“We have the opportunity now, building up to 2023 to the World Cup, to define our style of play and how we want to go about our business,” the Lions captain and top-order batsman said.

“If you look at South Africa, we have always been a more than competitive ODI unit, even to the point where the guys have got to positions of No 1.

“For me, it’s about trying to define a style of play, create something that makes us accountable, and most importantly, to be able to institute that style of play in any conditions or any occasion.”

Bavuma’s job starts in Centurion on Friday with the first of three ODIs against Pakistan.

He will have all his leading players to pick from until the second or “Pink” ODI at the Wanderers on Sunday.

After that, his task will become a little more tricky as Quinton de Kock, David Miller, Lungi Ngidi, Kagiso Rabada and Anrich Nortje all leave to fulfil their IPL contracts in India.

Two Border women cricketers and a coach are preparing to jet off to Bangladesh with the SA Emerging side for a five-match one-day series.  ...
Sport
3 weeks ago

Bavuma wore a brave face when asked about the disruption for the final ODI and four-match T20 series.

“It’s probably not as disturbing now,” he said.

“We are aware of the arrangement that is in place.

“For the first two games we’ve got the liberty of all our best players and it is important we get positive results from those two games.

“That is not saying we are conceding the result in the third game.

“We believe we have got worthy enough replacements coming in to fill those boots.

“We respect the relationship between Cricket South Africa and the BCCI.”

What the absence of the “Big Five” will do is provide Bavuma and the selectors with an opportunity to field some fresh and younger players.

They will not want too much of that going forward though because one of the major ingredients in a successful team is consistency in selection.