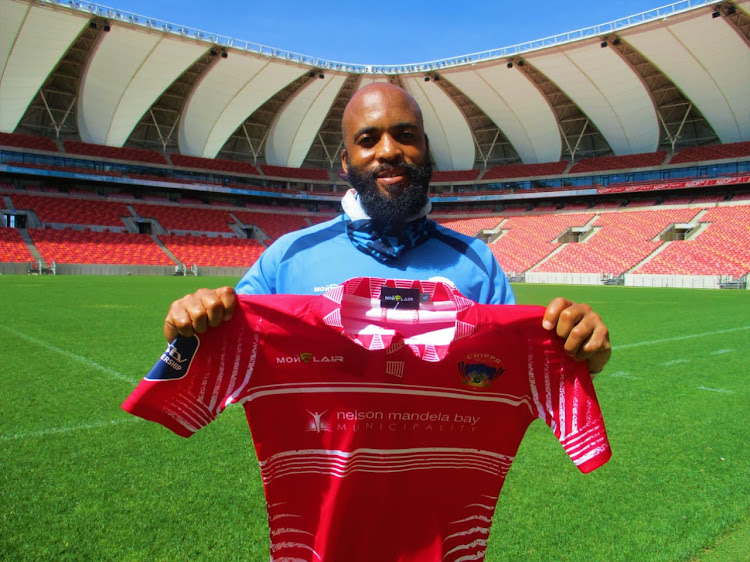 Oupa Manyisa poses with the Chippa United jersey at the Nelson Mandela Bay Stadium in Port Elizabeth after signing for the Eastern Cape-based club on March 30 2021.
Image: Supplied by Chippa United

The 32-year-old former Orlando Pirates captain and Mamelodi Sundowns star signed a short-term contract that will see him with the club until the end of this current 2020/21 season and will have an option to extend for another season.

The club‚ precariously placed in 13th spot and four points from automatic relegation danger with 10 matches remaining‚ said the veteran of 31 Bafana appearances is available for selection when Chippa resume their DStv Premiership campaign with a trip to Harry Gwala Stadium in umGungundlovu to confront fellow strugglers Maritzburg United on Saturday.

“I am elated to have the player of Oupa's talent and experience joining us‚ where we he will be an integral role in this team as we head to the last stretch of the season with the league and the Nedbank Cup‚” said Malesela.

“We do have a tough schedule with back-to-back fixtures and we are aiming at finishing strong in our remaining matches.”

Chilli Boys coach Dan Malesela says the break comes as a huge relief to his players after conjested back-to-back league and cup fixtures.
Sport
1 month ago

With regular captain Andile Mbenyane still recovering from a groin injury‚ Malesela said Manyisa would provide the experience that his team needs alongside the well-tavelled Anthony Laffor‚ Freddy Nsambiyumva and Kurt Lentjies.

The Chilli Boyz will also be boosted by the return of centre Sandile Mthethwa from the South African Under-23 duty‚ but they could sweat over the availability of their foreign contingent ahead of the clash against Maritzburg.

Both Riaan Hanamub (Namibia) and Nsambiyumva (Burundi) are expected to return later this week from their respective national team responsibilities.

Chippa are also in the semi finals of the Nedbank Cup.