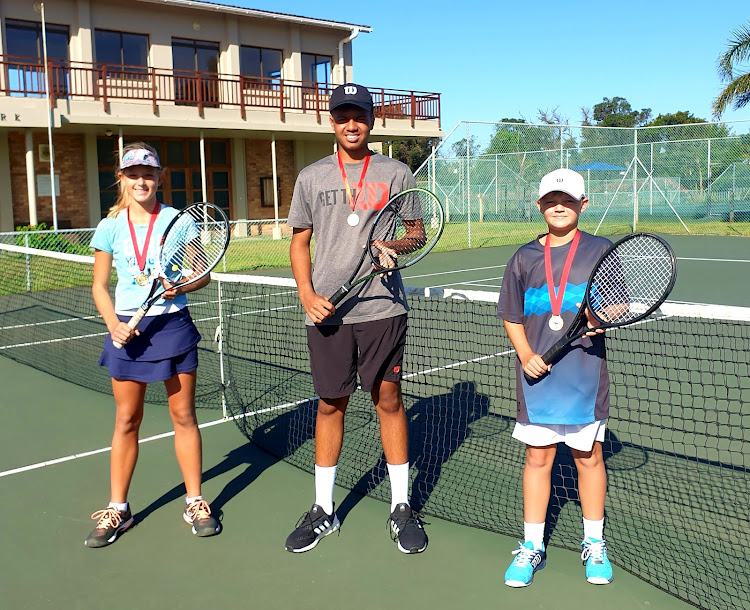 Three East London junior tennis stars shone in the National Mini-Series hosted in Nelson Mandela Bay recently as they gear up for the SA National Junior Champs to be held in Bloemfontein at the end of May.

There was a strong contingent from Buffalo City, with more than 14 players taking part.

One of the more recognisable names in SA tennis, Claude Moonieyan, also of East London, finished in the last four of the senior section.

The stars for Buffalo City were the junior trio of Nikhil Naidoo, Cade Clarke and Julia Kockott, who all won their age group categories.

Naidoo won the boys U16 where he was seeded number one. The lanky, fierce striker of the ball saw off strong competition to ensure he goes to the national championships in Bloemfontein with a bit of momentum.

In the U12 category, both girls and boys, BCM had good results with Julia Kockott and Cade Clarke winning gold medals.

Julia Kockott went to the tournament as the third seed. In the semifinal she beat the number one seed Amy-Leigh Stuart 6-2 6-4 to set up a date with Grace Kemp. In the final, Kockott beat Kemp  6-3 7-6 to cause an upset by outclassing the hometown favourite.

Five boys from East London turned up in the U12 section.

Cade Clarke, Babalwe Malotana, Uyintado Molatana, Uthandile Molatana and Elijah van der Berg were all vying for the gold medal. It would be number one seed Clarke who came out on top.

“This tournament has been a good warm-up for our Buffalo City Players as they prepare for the SA National Junior Champs,” said Tennis Eastern Cape president Neil Naidoo.