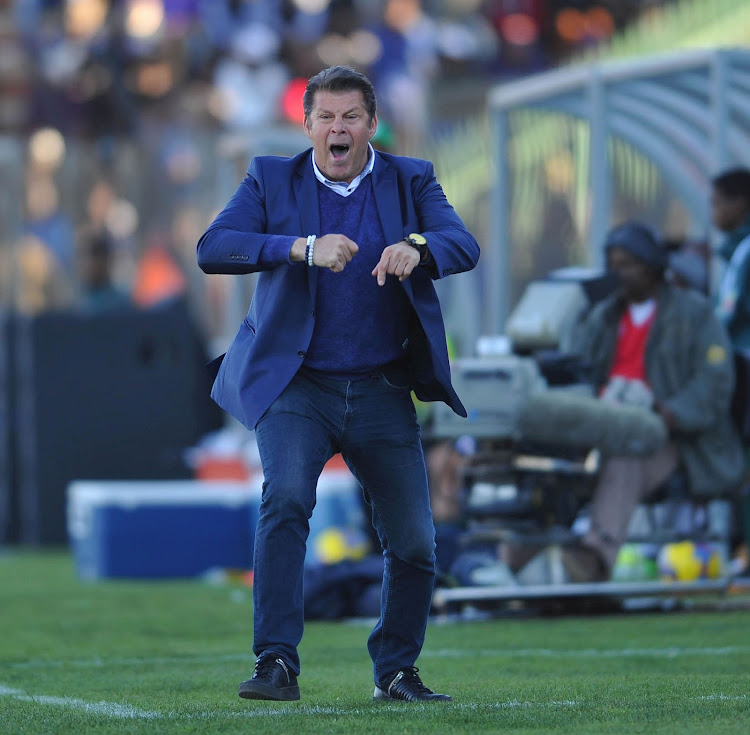 Chippa United appointed controversial Luc Eymael to their coaching staff on Monday, but the move was not made without the use of smoke and mirrors.

The club’s notoriously trigger-happy owner, Siviwe “Chippa” Mpengesi, sacked coach Dan Malesela on Sunday after an embarrassing 5-1 league defeat to Maritzburg United on Saturday night and Eymael was widely tipped to take over the role of head coach.

The club released a statement on Monday afternoon that started off mundanely and then took a bizarre twist.

Chippa first announced they had fired Malesela for a fourth time, which was common knowledge at the weekend though the club had not confirmed it until then.

The statement also surprisingly said Zwide’s Siyabulela Gwambi, the side’s assistant coach and part of the structures since 2015, would take over the head-coach responsibilities on an interim basis.

“We would like to wish him well on this appointment where the club objectives are on improving the current DStv Premiership log standings and on also reaching the prestigious Nedbank Cup final,” the statement read.

And then the bizarre.

“The club has also appointed well-travelled Belgian, Luc Eymael, in a technical adviser role, where he will play an integral mentorship role for the technical team.”

It is well-known that Mpengesi wanted Eymael before he hired Malesela for the fourth time.

The decision raised eyebrows as the Belgian had been fired with immediate effect by Tanzania Premier League side Yanga Africans last July for calling the club’s fans “illiterate and monkeys”.

Safa registered their unhappiness with Mpengesi’s decision in a statement issued after the confirmation of Eymael’s appointment.

The mother body said at the time they would write to the minister of home affairs to express their objection to the granting of a work permit for Eymael.

Safa also said they would also request the ethics committees of Fifa and Safa to “charge Mr Eymael as his despicable conduct is a violation of the codes of both bodies” and Chippa reversed the appointment at the time.

Eymael arrived in Gqeberha for talks on Monday carrying a whole heap of complications, with Mpengesi having written to Safa to seek clarity on whether the Belgian is allowed to work in SA after the controversy the club courted when they attempted to hire him in December.

An insider told TimesLIVE on Monday morning that the strongly-worded letter had been sent to Safa on Sunday and given its contents‚ Eymael was almost certain to get the job.

Safa seemingly softened their original stance in March and the coach is free to work in SA again.

“The club are definitely looking at Luc Eymael to come in‚ but they have written to Safa to ask for guidance on the next step.

“The views of the Eastern Cape premier’s office and regional political heads might also be considered because of what happened the last time [the club tried to hire Eymael]‚” the insider said.

If Safa provides positive clarity this week, Eymael is expected to be re-announced as the club’s head coach in the ensuing days.

But they would also have to clear his appointment with partners such as the Nelson Mandela Bay municipality and other stakeholders.

The club could face a backlash from the Eastern Cape provincial government‚ political leaders‚ observers and fans as Eymael is a largely polarising figure.

The provincial government slammed his short-lived appointment in Decemberand also fired a salvo at Mpengesi.

“It is the club’s intent to have Mr Eymael forming part of the technical team,” Chippa’s statement said.

“This is subject to consultations with our partners, sponsors and supporters.

“We have also sought necessary clearances from the SA Football Association on his appointment.”

The Chilli Boys’ next fixture is against Mamelodi Sundowns at Sisa Dukashe Stadium in East London on Monday.