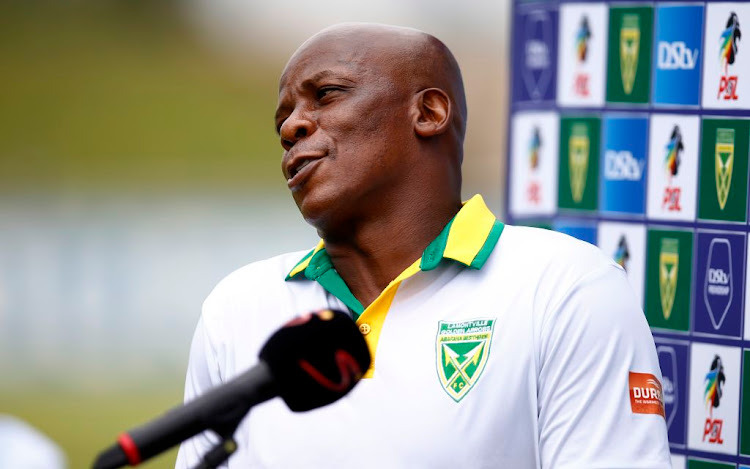 Lamontville Golden Arrows coach Mandla Ncikazi has committed himself to improving the team’s retention of the ball and creating chances after his charges struggled to find their normal rhythm in their draw away to Swallows FC at the weekend.

Arrows had one shot on target in the entire match during the 1-1 draw and it was the rare opportunity that gave the surprise title challengers the lead in the 70th minute. Seth Parusnath scored from a Knox Mutizwa cross after a quick counter that caught the Swallows defence in sixes and sevens, but the Birds snatched a last-gasp equaliser through Vuyo Mere deep in the referee's optional time.

“I’m disappointed we conceded that late, but truth should be told that we didn’t play our best game. Had we got the three points, we would have stolen them. It happens in some matches, but now the score is 1-1.

“We’re content with the point. It was just one of our worse games I’ve seen Arrows play this season. But the team is allowed to have one of those odd games. It should be a lesson going forward, but I know that after the (international) break we were not the same team.

“Maybe we have to work on something related to the break, it’s a lesson for all of us even in the technical side that maybe we should deal with the break differently. But I’m grateful that we got a point away from home.

“Look at the bigger picture ... we didn’t lose. Let’s take a point, learn and move forward.”

Lamontville Golden Arrows are in second place in the DStv Premiership and have scored the joint-most goals‚ but coach Mandla Ncikazi has said he ...
Sport
3 weeks ago

Ncikazi paid tribute to his Swallows counterpart Brandon Truter, who like him is in his maiden full season coaching a team in the top-flight of SA professional football.

“Let’s give credit to Brandon (Truter) and his technical team because I think his technical plan is very solid, and he plays with inverted full backs and keeps the wingers on the line. Exactly like Manchester City,” said Ncikazi.

“Top, top tactics, but we were not caught many times. So credit to him (Truter).”

With regards to their struggles against Swallows and failure to produce the game plan that has seen the Durban side trouble several top sides this season with quick passing build-ups, Ncikazi said there’s only one philosophy that they use and he will stick to it.

“We just have to fix it because we’re possession-based, and we create our chances from possession,” he said.

“For us it’s about the retention of the ball, retain it and don’t lose it cheaply. We’ll work on that first before we create chances. You’ll create chances to score if you keep the ball and we didn’t do that [against Swallows]. I think that’s what we must work on first.”

Arrows, who have collected 37 points from 21 matches and are three points behind log leaders Mamelodi Sundonws, will host Bloemfontein Celtic at the Sugar Ray Xulu Stadium on Sunday.