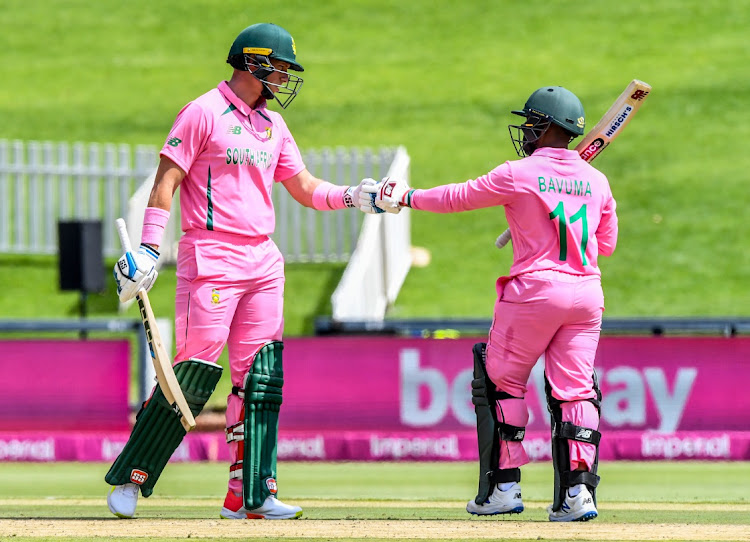 Proteas skipper Temba Bavuma believes versatility in the batting line-up has given his side a lot of confidence as they prepare for the series-deciding third Betway One-Day International encounter against Pakistan on Wednesday.

Bavuma’s side drew level in the three-match series after a thrilling 17-run victory in the Pink ODI at the Wanderers Stadium in Johannesburg on Sunday to set up a nail-biting finale at SuperSport Park, Centurion.

They were, however, made to sweat as left-hander Fakhar Zaman, who bludgeoned 193, was  cheekily run out in the final over.

After a measured start South Africa captain Temba Bavuma helped power his team to 341/6 in their Pink Day ODI against Pakistan on Sunday.
Sport
2 weeks ago

Bavuma said their performance showed versatility with the bat.

“If you look at our batting line-up, we have guys who can play dual roles.

“We mentioned a guy like Rassie [van der Dussen] who, when called upon, he [can come in and do the job].

“When the opportunity is there, when things are set, he can come in and put bowlers under pressure.

“A guy like David Miller as well, who is hitting the ball as well as he has in a while ... so there is a lot of confidence in our batting line-up.

“It is just a matter of churning out these kinds of performances consistently and really challenging top teams,” he told the virtual media post-match.

SA captain Bavuma: 'I just wanted to spend time at the crease with the belief that it would get easier'

The restraint showed by the top order helped pave the way for South Africa as they levelled the ODI series against Pakistan at the Wanderers on ...
Sport
2 weeks ago

“He played an incredible innings. I think it’s one of the best I have ever seen.

“To chase down 340 single-handedly was always going to be a tough task and we knew we weren’t too far in terms of winning the game.

“For me, speaking to the bowlers, it was just about trying to be clear as to what our plan is and what we are trying to do.

“Then it becomes a matter of execution, because at least that is something we could work on.

“From a fielding point of view, it was just to make sure that when the opportunities do come, we do take them, as we saw in the run-out with Aiden [Markram] at the end,” he said.

A maiden career century by Rassie van der Dussen was overshadowed by Babar Azam’s commanding ton as Pakistan beat the Proteas by three wickets in the ...
Sport
2 weeks ago

With a number of key players jetting off to India in preparation for the Indian Premier League which starts on Friday, Bavuma said the match was a chance for players to come in and show they had what it took to compete at international level.

After two dramatic results to start his career as the Proteas leader, Bavuma  said it was important in his role to take a step back and be clear in what they wanted to do in the moment.

“When things are happening the way they are with the guys batting like that, things can get away from you.

“I think it’s important to take a step back and just get a grip on what is happening at the moment.

“I always say to the bowlers and the fielders, as long as you are clear about what we are trying to do, if the batter bats well, he bats well, there is not much they can do. They are also allowed to play well, that is why they are international batters,” he said.