Spieth ends long journey back to the winner’s circle 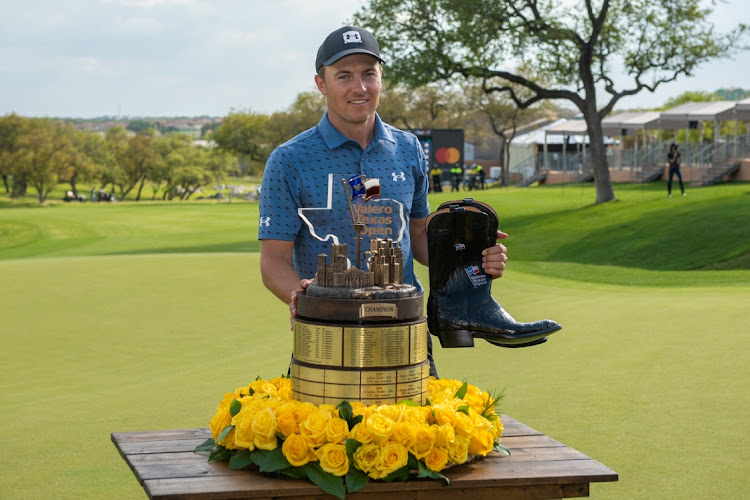 BACK IN THE SADDLE: Jordan Spieth holds the trophy and champion's boots after winning the Valero Texas Open in San Antonio, Texas on April 4 2021.
Image: USA TODAY SPORTS/ DANIEL DUNN

After nearly four years without a win, 27-year-old American Jordan Spieth is back in business.

The one-time wunderkind picked up his first PGA Tour win a couple weeks shy of his 20th birthday in 2013 and went on to win the Masters — his first of three major titles — two years later, kicking off a remarkable early career run. But he hasn't hoisted a trophy since the British Open in 2017.

That drought ended on Sunday as he beat compatriot Charley Hoffman by two strokes at the Valero Texas Open at TPC San Antonio, telling reporters after the final round, that it hadn't completely hit him yet that he was back in the winner's circle.

“It's been a road that's had a lot of tough days. I've had people in my corner who have always believed in me even when I've believed less in myself,” said Spieth. “I feel a lot of gratitude to those who have helped me get back here.”

The win could provide much-needed momentum for the 12-time PGA Tour winner, who came into the tournament looking to fine-tune his short game before travelling to Augusta this week to compete in the Masters.

Tiger Woods back home and recovering after car accident

“I've got quite a bit to piece together in my game, so it's actually pretty easy for me to put my head down and focus on getting back to work for this next week,” said Spieth, adding that he hoped to work on his swing.

“The consistency and the cleanup and kind of the tightness of the swing still has quite a way to go.”

He shot 6-under-par 66 in the final round and finished on 18 under 270 for the tournament over the TPC San Antonio AT&T Oaks Course.

Charlie Hoffman finished in second place at 16 under, shooting an identical 6-under 66 on Sunday.

England's Matt Wallace (70) resided in third place at 14 under, while Lucas Glover (66) finished in fourth place at 12 under and India's Anirban Lahiri (69) settled for fifth place at 10 under.

“There were a lot of times when I wasn't sure I would be here, talking about (a victory)," Spieth said. “I never really doubted myself, but when you lose confidence, it's hard to see the positive going forward. I just kept my head down.”

World number one Dustin Johnson confirmed on Saturday he did not put his name forward for a spot on the US team for this summer's Tokyo Olympics and ...
Sport
1 month ago

Spieth and Wallace were tied for the lead at 12-under par when play started on Sunday, with the former making a charge early. He had birdies at the second and third hole before a bogey at No 4, but recovered with two more birdies at Nos 6 and 8.

Spieth made the turn to the back nine with a two-shot lead over Hoffman and increased that to three with a birdie at the 422-yard, par-4 12th hole when he reached 16 under. He did just enough from there, and when Hoffman drew to within one shot, Spieth sealed the victory with a 5-foot birdie putt at No 17 before a par 5 on the closing hole.

“I felt really light as if I wanted to smile and come out and have some fun,” said Spieth, who failed to win earlier this season when he had 54-hole leads at Scottsdale, Arizona and Monterey, California.

“It's been a challenge for me on these Sundays, when I have been in contention.

A three-time major winner, Spieth will now try to turn the clock back even further in an attempt to reprise his victory at The Masters in 2015. His victory at Texas makes him one of the favourites for the first major of 2021, which begins on Thursday at Augusta, Georgia. — Reuters