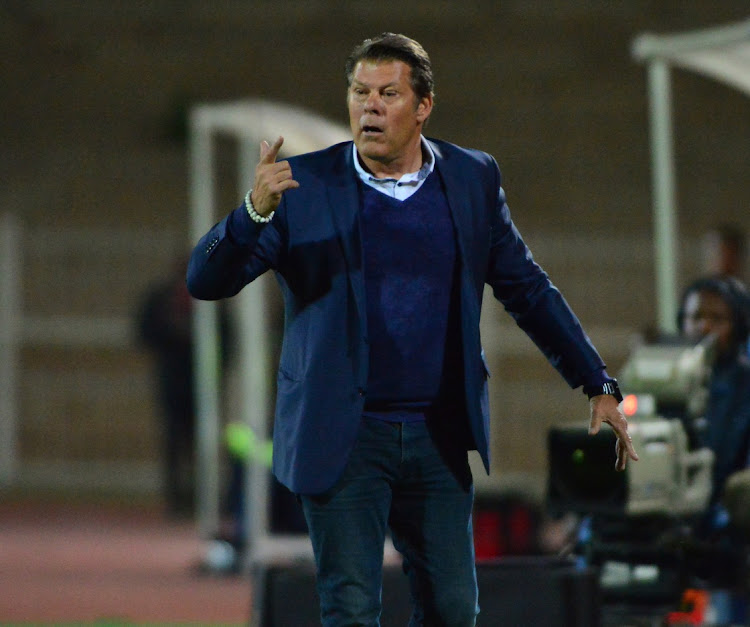 ON HIS WAY: Chippa United have withdrawn the appointment of Belgian coach Luc Eymael as a technical adviser
Image: PHILIP MAETA/ GALLO IMAGES

Chippa United bowed to public pressure once again and confirmed the reversal of the appointment of controversial coach Luc Eymael as the team’s technical adviser on Wednesday while also launching a broadside at radio host Robert Marawa.

The Belgian was appointed as a technical adviser by the club on Monday but his appointment triggered public and political outrage.

On Wednesday, the club released a statement saying they had reconsidered the appointment of Eymael and that he was on his way back home to Europe.

This was the second time the Gqeberha club had to backtrack on their appointment of the former Free State Stars coach.

In December, and following the sacking of coach Lehlohonolo Seema, the Chilli Boys announced Eymael as his successor.

His appointment drew widespread condemnation from the PSL’s mother body, Safa, local government and social media because of racist and offensive remarks made at a previous club in Tanzania.

Controversial Belgian Luc Eymael has emerged as a strong favourite for the vacant Chippa United coaching job and is expected to be named as the ...
Sport
2 weeks ago

A clip of the remarks was played on the Robert Marawa World Wide Sport radio show.

The result was that Eymael was released by Chippa within 24 hours of that appointment.

He lasted three days at the club this time around.

“Chippa have decided not to continue with Eymael’s appointment, who will proceed to return to Belgium,” Wednesday’s statement said.

“It is clear that Eymael himself requires further time to clear his name.

“He has reassured the club that he will, in his own capacity, take legal action concerning his rights, including the dissemination of the offending media clip, through his own lawyers.

“We as a club maintain our stance against racism of any form and wish to make it clear that our intended appointment of Eymael would not have happened were the allegations against him validated in any form.”

Chippa management further lashed out at the SABC and, in particular, blamed the Robert Marawa World Wide Sport show saying it had misled the public through its broadcast and reporting on the issue in December.

“A new challenge is now faced through the unsubstantiated, unethical and prejudicial actions of in particular Robert Marawa’s show broadcasts, which on top of Marawa himself clearly expressing bias, invited a political party and a niche union representing coaches to express their views on what are his views, including the publicly stated intention to disrupt Chippa’s upcoming fixtures,” the statement said.

“The views expressed by callers to the show were a clear intent to preclude the free movement of Eymael and the proper fulfilment of our fixtures and this immediately puts the safety and security of the team, supporters and stakeholders at risk.

“We are naturally sensitive to the views of our fans, sponsors, the general public and SA as a whole and hence the decision.

“However, we do regret and condemn the manner in which a narrative was improperly created, without the proper facts being put forward.

“The team will now focus on means to pull itself out of the compromised league position it finds itself in and further announcements regarding the coaching staff will follow.

“We regret any negative impact that the turn of events highlighted above may have caused to our loyal fans and sponsors.”

See the full statement below:

For the full statement visit www.heraldlive.co.za