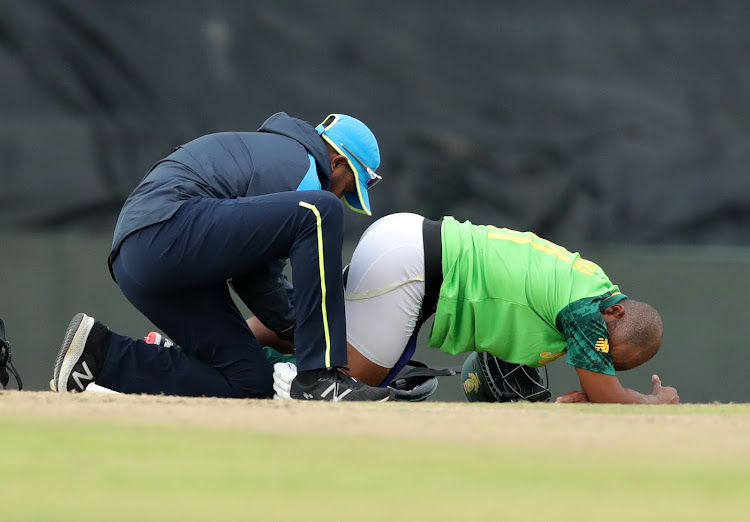 Proteas captain Temba Bavuma receives medical attention during the third and final ODI match against Pakistan at SuperSport Park on April 7 2021. Bavuma went down after what looked like a hamstring problem.
Image: Samuel Shivambu/BackpagePix

Proteas coach Mark Boucher is sweating on the fitness of limited overs captain Temba Bavuma and senior top order batsman Rassie van der Dussen before the start of the four-match T20 series against Pakistan on Saturday.

Bavuma is doubtful with a hamstring injury he suffered during the third and final ODI in Centurion on Wednesday‚ while Van der Dussen did not play in that loss to Pakistan due to a grade one quad strain.

If Bavuma and Van der Dussen do not respond to treatment in time for the T20 series‚ the Proteas will be without seven first-choice players with the leadership role handed to Heinrich Klaasen.

“Temba is quite a tough guy but when you see him wobbling around it doesn’t look good‚ and it got worse in the change room‚” said Boucher.

South Africa have suffered a blow to their batting line-up after it emerged that key top order batsman Rassie van der Dussen will not play in the ...
Sport
1 week ago

The Proteas suffered a 1-2 series loss to Pakistan after the defeat in Centurion on Wednesday.

“He seems to be in a bit of pain because of the way he is walking. Unfortunately it does not look good and doesn’t put us in a good position for the T20 series‚ but we are going to have to find a way.”

Boucher said Van der Dussen would stay with the T20 squad with the hope of shaking off the injury.

“Rassie has between a grade one and grade two quad strain‚ which means he’s probably out for 10 days.

“I would be stupid to try to push him to play in these T20 games.

“He is staying with the squad, hoping that he can have a quick turnaround‚ but it doesn’t look like he will be able to get on to the park.”

Looking back at the 28-run loss to Pakistan‚ Boucher said the absence of De Kock‚ Miller‚ Rabada‚ Nortjé and Ngidi affected the team.

“It’s a tough one because you want to start winning series at home‚ but we knew a while ago that the IPL guys would not be here‚” he said.

“Unfortunately the other blow was the [unavailability of] Rassie. It is nice to give opportunities to other players and a couple of them did really well and had good games.

“Unfortunately it is not about individuals but the team‚ and we have lost the series against Pakistan at home and that is disappointing.

“It is nice to see that our depth pool is getting to where we want it to be, so that when guys are out of form, we have backup players who will come on and make a mark on international cricket.

“Kyle Verreynne and Janneman Malan did very well‚ Kesh (Keshav Maharaj) came in and had a fantastic game as well.

“Guys are there and they have to keep on working hard on their games and there will opportunities whenever there are injuries or scenarios like these.

“I am happy for the individuals who came through.”