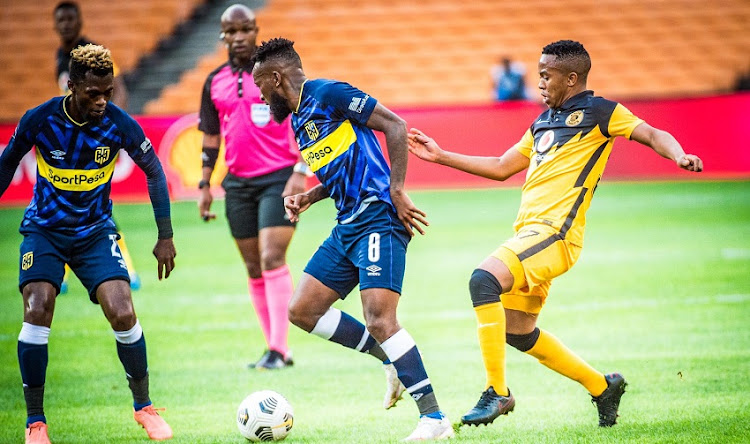 Kaizer Chiefs suffered their seventh defeat of the season on Wednesday and have dropped back to 11th on the table.
Image: KAIZER CHIEFS

Kaizer Chiefs coach Gavin Hunt desperately wanted to collect maximum points against Cape Town City on Wednesday evening as he still harbours hopes of at least finishing in the top five in his maiden season at the helm at Amakhosi.

But a 2-1 defeat to City at the FNB Stadium did not provide Chiefs with the confident boost they sought‚ given they have a tricky meeting against premiership leaders Mamelodi Sundowns in Pretoria on Sunday that could see Hunt’s dream evaporating into thin air.

Chiefs suffered their seventh defeat of the season on Wednesday and they have dropped back to 11th place on the table‚ just 11 points away from bottom-placed Black Leopards with eight games to go in what has been one of their most disastrous campaigns in the PSL era.

City had the possession and could have benefited when a stray clearance by Chiefs midfielder Nkosingiphile Ngcobo rolled kindly on to Tasrreq Morrish's path‚ but the gangling striker shot the early chance well over the bar in the 18th minute.

Cardoso on Chiefs mentor Hunt: ‘The coach is giving us more confidence’

Kaizer Chiefs’ combination play and ability to keep the ball on the ground in build-ups has improved markedly in recent games‚ centreback Daniel ...
Sport
1 year ago

There was no such luck for Chiefs four minutes later as Morris connected with a well delivered Terence Mashego’s cross from the left to beat home goalkeeper Itumeleng Khune with a low shot.

The City goal came about after Chiefs right-back Siyabonga Ngezane lost possession and was caught out of position‚ leaving Mashego with a huge space to run with the ball before delivering the pinpoint cross for Morris to score his third goal of the season.

Hunt's charges were also overpowered by the visitors in central midfield where Mpho Makola and man-of-the-match Thato Mokeke had control of the game and dominated Chiefs’ Bernard Parker and Njabulo Blom‚ who both struggled with the pace and tempo of the game‚ especially in the first 45 minutes.

Hunt tried to shore up his midfield with the introduction of Kearyn Baccus for Ngcobo at the restart‚ pushing Parker out wide on the right and pairing the substitute with Blom in the heart of the midfield.

City‚ though‚ always looked dangerous on the counter in the second stanza‚ with Mashego continuing to give Ngezana a hard time and delivering a couple of crosses for the target man Morris.

With Chiefs failing to regain control of the match‚ City continued to press and the visitors duly stretched their lead when Bradley Ralani’s shot from just outside the area bounced off Chiefs defender Erick Mathoho and rolled into an empty net with the deflection sending Khune the wrong way.

Kaizer Chiefs coach Gavin Hunt was disappointed that they did not get a penalty in the first half in their drawn DStv Premiership match against ...
Sport
1 year ago

Chiefs‚ however‚ gave themselves a chance to at least earn a point in this game when Ngezana delivered a cross that was headed in by substitute Baccus as the City defence was caught napping in the 67th minute.

Ngezana himself missed a glorious chance to give Amakhosi the equaliser in the 84th minute when he shot wide after getting a good cross from another substitute Happy Mashiane.

With this victory‚ their second in a row after beating SuperSport United 3-0 at home in the previous match‚ City are sitting comfortable at seventh and now have a greater chance of pushing further up the log if they keep their form in the last seven matches.