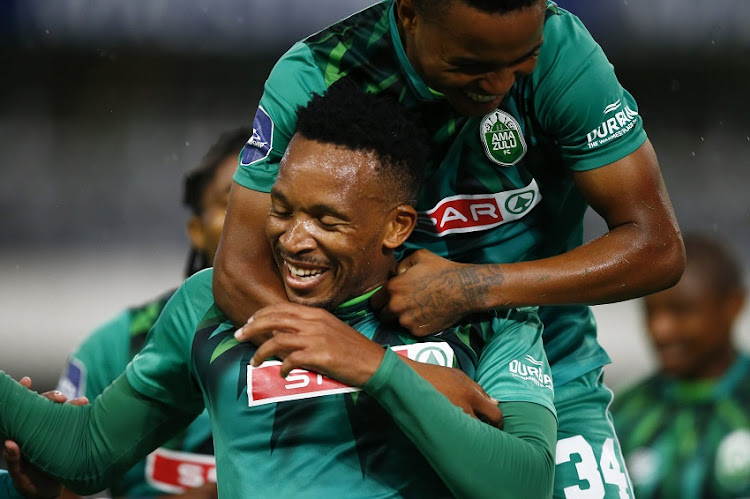 AmaZulu notched their sixth win from seven unbeaten matches keeping themselves in the DStv Premiership title race with a convincing 2-1 win against TS Galaxy at Kings Park in Durban on Saturday.

Lehlohonolo Majoro’s first-half brace, with goals scored in the 33rd and 42nd minutes, kept AmaZulu (44 points from 24 games) in second place and three points behind leaders Mamelodi Sundowns (47 from 21).

Galaxy’s tricky forward Lindokuhle Mbatha earned a penalty in the dying seconds of the fourth minute of injury time, then scored from the spot for a late consolation in the 95th.

In-form Usuthu went to 16 matches in all competitions with just a single defeat.

The games in hand of Sundowns, who meet 11th-placed Kaizer Chiefs at Loftus Versfeld on Sunday, keep the three-time defending champions the overwhelming favourites. But Usuthu coach Benni McCarthy vowed before the Galaxy match-up that his side intend to keep the pressure on Downs and see what happens.

On a wet Kings Park surface AmaZulu seemed intent on proving their coach’s point largely overwhelming ninth-placed Galaxy in the opening half, then consolidating effectively in the second.

Though they are outsiders to win the DStv Premiership‚ AmaZulu coach Benni McCarthy has vowed that his team are going to push leaders Mamelodi ...
Sport
2 weeks ago

AmaZulu’s intensity, movement and work-rate saw them overcome a slippery surface and take the game to Galaxy from the first minute, when left-back Sibusiso Mabiliso got forward and crossed, Majoro touching onto the side-netting.

Just after the half-hour midfielder Siyethemba Sithebe found another lively forward presence, Luvuyo Memela, on the edge of the box, who fed the run down the left of Majoro. The striker cut in to beat the challenge of Justice Figuaredo and struck a powerful left-footed shot into the top-right corner past goalkeeper Marlon Heugh.

As the break approached Mabiliso’s accurate cross from deep found Sphesihle Maduna to get up and head from close range for Heugh to parry. Majoro easily swept the loose ball across an exposed goal-line.

The only thing missing at Kings Park were goals. AmaZulu and Mamelodi Sundowns produced an entertaining and often ill-tempered match but had to ...
Sport
2 weeks ago

With a two-goal lead AmaZulu consolidated in a second half marked by an early downpour that kept the pitch soaked.

Galaxy worked hard in an attempt to turn their greater possession and territory into opportunities, but Usuthu’s low block was organised enough to restrict the visiting team to half-chances.

Deep in added time substitute Butholezwe Ncube brought down Mbatha, referee Tshidiso Maruphing pointing to the spot. Mbatha got up to slot to the left of keeper Veli Mothwa.