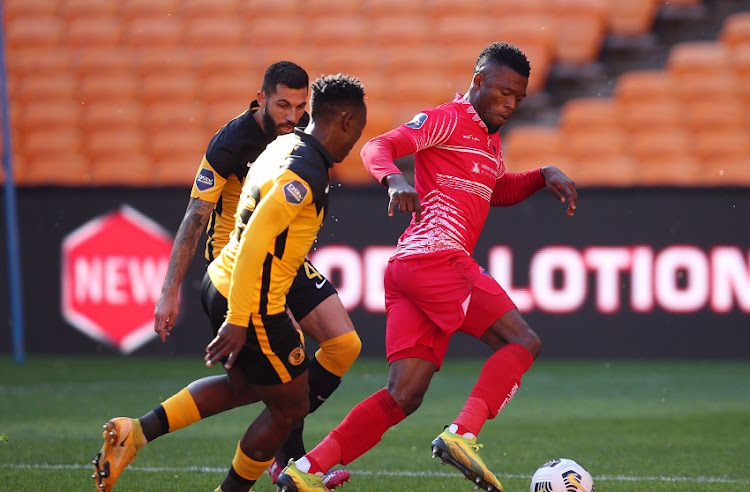 Kaizer Chiefs have been as reliable as Donald Trump’s hair in a strong breeze in 2020-21‚ and on Wednesday followed a stirring win at the weekend against Mamelodi Sundowns with a limp 1-0 defeat at home to second-last Chippa United.

After ending Sundowns’ 22-match unbeaten run‚ Chiefs took it upon themselves to end Chippa’s 11 games without a win at FNB Stadium‚ substitute Bienvenu Eva Nga profiting from an Erick Mathoho defensive howler to score the 84th-minute winner.

Chippa appointed Serbian-origin long-time South African resident Vladislav Heric officially as their “technical adviser” this month. But he’s been on the bench for two matches — on Wednesday and at the club’s 0-0 home draw against Golden Arrows on Saturday — and on the team sheet he’s listed as the “head coach”.

So the coaching situation at the PSL’s most notorious club for doubt over that position remains muddy.

Chippa take their chance as Chiefs go off the boil

Given that‚ and the fourth firing of Dan Malesela last month‚ and fiasco of the attempted hiring of racism-tainted Luc Eymael soon after that‚ Chippa’s 15th placing coming into the game should have come as no surprise‚ even if they’ve stumbled into the Nedbank Cup final.

For an efficient team‚ such a side should be there for the taking. Chiefs — a combination who have pulled off a highlights package of ups in 2020-21‚ including reaching the Caf Champions League quarterfinals and beating Sundowns 2-1 at Loftus on Sunday‚ but have been anything but consistent — are not that efficient side.

After Gavin Hunt’s men's heroics and energy against Downs‚ they laboured against a Chippa who‚ while they may be in a fight for points to avoid the drop‚ were largely pedestrian.

Chiefs need to find some form of consistency in results if they want to break back into the top eight for the first time since January.

And Amakhosi did come out displaying a measure of the quick-passing attacking and tight defending that has been the hallmark of Hunt’s successful past teams. In a tight opening half‚ though‚ they produced just a few chances‚ and did not convert them.

Kaizer Chiefs coach Gavin Hunt has admitted that he is puzzled by his charges' tendency to raise their game against more illustrious rivals and then ...
News
1 week ago

Dumisani Zuma‚ after coming off the bench to score a first goal of his season against Sundowns‚ got a fourth start of the season. He was lively on the left to start with‚ beating Nyiko Mobbie to force a save from goalkeeper Ismail Watenga with a cross-cum-shot.

It was not just the game that meandered in the second half‚ Chiefs did too‚ losing direction and being stretched on occasion in defence.

Mathoho’s defensive howler with six minutes remaining had an air of inevitability to it. Sizwe Mdlizo headed forward from midfield and Chiefs’ centreback‚ facing his goal‚ attempted a header back to goalkeeper Itumeleng Khune that fell metres short, allowing Eva Nga to run through and get the touch into goal.

Answers that Hunt has sought all season have not been provided by a lone rally against Sundowns. And the top eight and avoiding Amakhosi’s two worst finishes of ninth remain far from a sure thing.