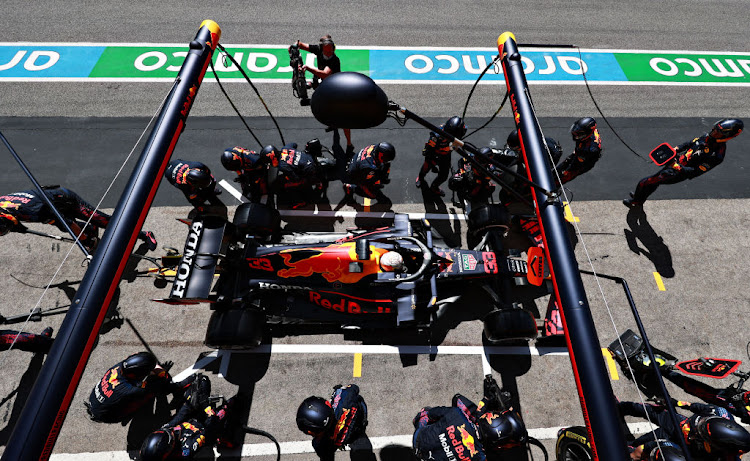 Max Verstappen stops for fresh tyres during the closing stages of the F1 Grand Prix of Portugal at Autodromo Internacional Do Algarve on May 2 2021 in Portimao, Portugal.
Image: GETTY IMAGES/ MARK THOMPSON

Red Bull's Max Verstappen completed an unwanted “track limits” triple when he was stripped of a fastest lap bonus point at the Portuguese Grand Prix on Sunday.

The deletion for going too far off the track came a day after the Dutch 23-year-old missed out on pole position when he also ran marginally wide in qualifying.

Victory also slipped through his fingers in Bahrain last month when he had to hand back the lead to Mercedes rival Lewis Hamilton for a breach while overtaking the seven-times Formula One world champion.

“All good things come in threes. I hope that's the end of it.”

Verstappen, who finished second and is now eight points behind race winner Hamilton, was told his fastest lap had been deleted just before the podium celebrations.

“Oh really? That's a good one,” he said with a look that made clear he was not amused.

“That’s a bit odd because they (the stewards) were not checking track limits in 14, but whatever.”

Updated notes circulated by race director Michael Masi had notified teams of the change on Saturday morning, setting out the limits for turn 14.

Verstappen is enjoying his best ever start to a season, winning one race and finishing second in the other two won by Hamilton, but he acknowledged the title battle would come down to fine margins and avoiding mistakes.

“It’s a long season and we can’t afford to have any retirement or silly mistakes so we just have to keep on doing what we’re doing.”

Lewis Hamilton kicks off his bid for a record eighth Formula One championship in Bahrain on Sunday but Red Bull rival Max Verstappen can strike an ...
Sport
1 month ago

Team boss Christian Horner said the track limits rule and the consistency of its application was a continuing “bone of contention”.

He said his other driver Sergio Perez, who finished fourth, had been “super-frustrated” earlier in the race when he was passed by McLaren's Lando Norris who appeared to go off track without punishment.

“We get a document from the FIA and it changes from one day to the next. The application of these are frustrating,” said Horner.