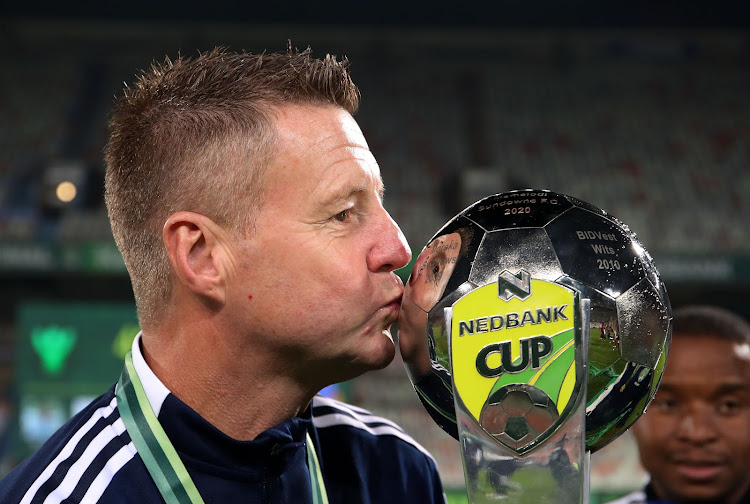 Dylan Kerr has won his first trophy as a coach in South Africa.
Image: Muzi Ntombela/BackpagePix

Dylan Kerr's journey to being a trophy-winning coach in South Africa has had plenty of twists‚ turns and obstacles‚ to the point that even by Tuesday he was not certain to sit on the bench for Tshakhuma Tsha Madzivhandila (TTM) in Saturday night's Nedbank Cup final.

TTM brushed aside Chippa United with an assured display at the Free State Stadium that was far more convincing than the 1-0 scoreline suggests.

For Kerr — who has spent three months directing affairs from the stands for the new Premiership club who‚ under the new ownership of Abram Sello have been striving to put their past tribulations under previous owner Lawrence Mulaudzi aside — it was a sweet victory.

The former winger‚ who spent three exciting seasons playing at Arcadia Shepherds in the 1980s‚ only resolved his work permit issue on Tuesday‚ just in time to sit on the bench in TTM's last-gasp 2-1 league win against Kaizer Chiefs at Peter Mokaba Stadium that night.

Tshakhuma Tsha Madzivhandila (TTM) coach Dylan Kerr says he is going to have a migraine trying to select the team for the Nedbank Cup final against ...
Sport
1 year ago

“It's been surreal. But the hard work that goes on behind the scenes doesn't get recognised.

“Because nobody sees what I have to do with [Kerr's assistants] David Mathebula and Mpho Maleka and all the other staff‚” Kerr‚ glowing from a trophy win‚ said after Saturday night's cup final.

“We've had a lot of work to do, on and off the field. It's not just the training we have to deal with. We've had to deal with all sorts of issues and problems and it's not football-related.

“On Tuesday morning I had to spend two-and-a-half hours running around Polokwane‚ getting things in place‚ getting a friend to drive all the way from Johannesburg to Polokwane with my PSL card.

“And to cap it off to get this win, in the circumstances, has been absolutely a dream come true.

“And I'm so proud of everybody who's been involved with the club. I can't really pay homage to them much more than say thank you.”

Kerr had a fascinating playing career‚ arriving at 18 in the old National Soccer League (NSL) for coach Stan Lapot's Shepherds having thought he had blown his chances in English pro football at Howard Wilkinson's Sheffield Wednesday.

In the star-studded SA football of the 1980s‚ the teen winger was among 10 players nominated for the 1986 NSL Player of the Season.

He has had a storied return to SA football as a coach‚ too‚ where he was an assistant for a few months to ex-Arcadia teammate Sammy Troughton at Mpumalanga Black Aces in 2009.

Tshakhuma Tsha Madzivhandila (TTM) will not exist by that name past the 2020-21 season, but before that title disappears the Limpopo side have lifted ...
Sport
1 year ago

Arriving from Kenya's Gor Mahia in November 2018‚ Kerr bounced between stints at Black Leopards‚ where he left after eight months for the UK when his mother was ill‚ and died; then Baroka FC (11 months)‚ Leopards again (two months)‚ and then his bizarre situation at TTM.

Kerr was asked if the Nedbank victory‚ secured via exciting attacking midfielder Ndabayithethwa Ndlondlo’s 27th-minute strike‚ was his biggest achievement in SA football.

“Look‚ the biggest achievement I've ever had is coming to South Africa in 1986. It opened my eyes to the football fraternity of, in those days, the NSL‚” he responded.

“And I returned 20-odd years later when Sammy Troughton brought me back. And I've been in and out of the country three or four times. And it's always been a struggle.

“I've always said I know how to do my job‚ because I work really hard both on and off the field. And to do this the way I've done it is credit not just to me but to the chairman [Sello] who brought me to the club. A lot of people said I was making the biggest mistake going to TTM.

“And [also credit to] the help I've had from my two assistants who've embraced the way that we've worked together.”

TTM‚ in 14th place in the DStv Premiership‚ are locked in a relegation battle to avoid the playoff spot‚ or worse‚ with Nedbank final opponents Chippa‚ who are in 15th.

Tshakuma meet sixth-placed SuperSport United in the first of their last five matches at Lucas Moripe Stadium on Wednesday.