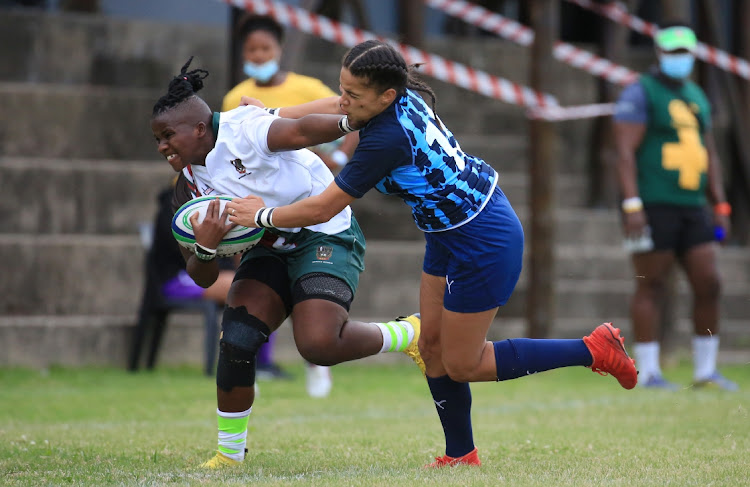 Lusanda Dumnke of the Border Women's Rugby is tackled by Layla Arrison of the Blue Bulls Women during their opening encounter of the Women's Premier Division at the Police Park in East London on Saturday.
Image: SINO MAJANGAZA

The fourth round of the Women’s Premier Division belonged to the Blue Bulls Women as they shot up from sixth to third on the log after an impressive victory over the EP Queens in Gqeberha, while Western Province and the Border Ladies cemented their positions at the top of the standings.

Ayanda Malinga, who has represented the Springbok Women and Imbokodo teams, scored three tries in the Blue Bulls’ dismantling of the Queens, with Libbie Janse van Rensburg continuing with her good early-season form by adding two tries and four conversions.

In East London, the Border Ladies had to work hard for their 35-14 win over the Boland Dames, with the home team scoring six tries to two as their steady attack proved too much to handle for the visitors from Wellington.

Border Women head coach Nwabisa Ngxatu says she is pleased with her team’s start to the Women’s Premier Division but now wants an 80-minute ...
Sport
3 weeks ago

And in the first game of the day, log-leaders Western Province were made to work very hard for a 10-0 victory over the Cell C Sharks in Durban, where Alichia Arries scored two tries for the second time this season.

Border continued their strong start to the Women’s Premier Division with a hard-earned 35-14 victory over a game Boland Dames side on a sunny Saturday afternoon in East London.

The home side dominated proceedings and though it was a bit of a stop-start affair, they still did enough to leave Police Park with five log points and cement their second spot on the log.

Border scored three first-half tries to lead 20-0 at the break.

The Bulls side was full value at the Nelson Mandela Bay Stadium in Port Elizabeth, adding two second-half tries to five scored in the first half, three of those by speedster Malinga.

Malinga combined beautifully with Blue Bulls flyhalf Janse van Rensburg, who showed off her credentials with a brace of tries and four conversions for an 18-point haul. — SA Rugby Communications