Duncan Village’s Azinga Fuzile has the world at his feet

Win over Briton Martin Ward celebrated across the Eastern Cape 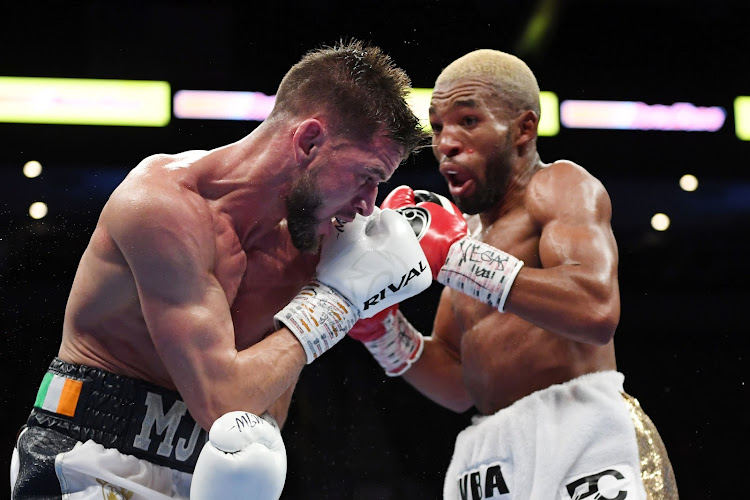 Azinga Fuzile and Martin Ward battle it out during their IBF junior lightweight eliminator in Las Vegas, Nevada on May 29 2021.
Image: GETTY IMAGES/ DAVID BECKER

The Duncan Village boxer proved his boxing credentials in stunning fashion when he floored Briton Martin Ward twice before finishing him off in the seventh round of their IBF junior lightweight title eliminator in Mandalay Bay, Las Vegas, US on Sunday morning.

The fight, streamed live by DAZN, was the undercard to the WBC lightweight title duel won by Devin Haney when he beat Jorge Liranes on points.

Fuzile was fighting in the US for the first time but never displayed signs of stage fright as he broke down the Brit, flooring him once in the fourth round in a dominant performance.

It will be a case of now or never for Azinga “Golden Boy” Fuzile when he faces Briton Martin Ward for the IBF junior lightweight world title ...
Sport
3 weeks ago

Using brilliant counters which included a sneaky right hook every time the Brit threw a left jab, Fuzile built a points lead on two of the judges' scorecards.

“We practised it in the gym,” Fuzile said.

“We knew that he was going to throw a left jab and we planned to counter it with a right hook. The plan worked like a charm.”

Fuzile again dropped Ward with the right hook in round seven, forcing the Brit's handlers to throw in the towel and save their vanquished boxer.

The win sets Fuzile up for the winner between his lone conqueror Shavkat Rakhimov and Kenechi Ogawa who will duke it out for the vacant IBF title in Dubai in July.

The Duncan Village boxer was leading on all the cards when Rakhimov rallied to stop him in eight rounds of their controversial September 2019 title eliminator.

The Tajikistan-born Russian was caught being administered what looked like smelling salts before the stoppage.

“I hope Rakhimov wins the fight because I have unfinished business with him,” Fuzile said after beating Ward.

“We need to put this straight but whoever wins I will be ready for him.”

Mabuyane wishes Fuzile well as he leaves for US bout

Duncan Village boxer Azinga Fuzile finally left for the US on Sunday night, accompanied by only his promoter Teris Ntutu after his technical team was ...
Sport
3 weeks ago

Fuzile's win was celebrated across the province with premier Oscar Mabuyane's office joining in to hail it as a big moment for the sport in the province.

The boxer's promoter Teris Ntutu, who accompanied him to US, said the victory validated Fuzile's world class credentials.

“We are grateful for the strategy the technical team devised for the fight,” he said.

“Our next step is a world title shot and we are going after it,” he said.

Fuzile and his team led by trainer Mzamo “Chief” Njekanye are expected to arrive back in East London on Monday.