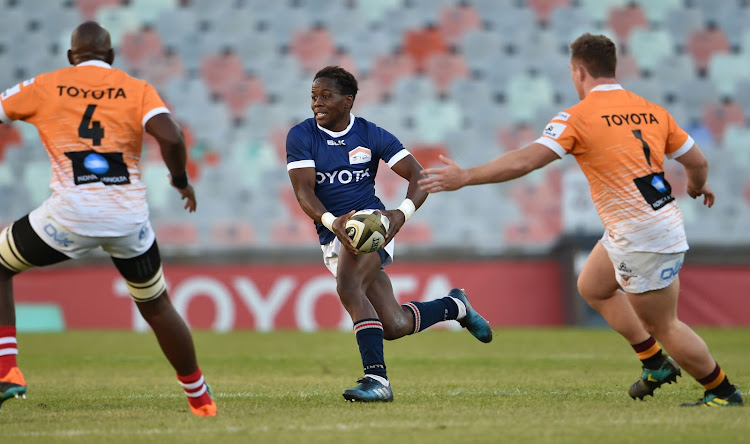 EP’s Inny Radebe goes all-out for the Toyota Invitational side during the challenge match against the Cheetahs at Free State Stadium in Bloemfontein on Saturday.
Image: JOHAN PRETORIUS/ GALLO IMAGES

Everyone expected the Toyota Cheetahs to comfortably win their friendly in Bloemfontein on Saturday but instead it was the scratch Toyota Invitation team that shocked their opponents with a surprisingly comfortable 43-35 win.

The beaten Cheetahs captain Ruan Pienaar summed it up afterwards when in the post-match television interview he said it was a disappointing result for his men against a team that had only been together for three days.

That was why the Cheetahs were such overwhelming favourites not only to win, but to win with something to spare.

At the same time, though the players in the Invitation team were mostly fringe players at their respective Rainbow Cup/PRO16 franchises, they were touted by national director of rugby Rassie Erasmus during the build-up week as a combination of the cream of the young talent he wanted to look at before making his Springbok squad and South African A selection next week.

Frustrated EP Elephants coach Peter de Villiers says his players can see they are not being treated well and he plans to take steps to ensure they ...
Sport
1 month ago

And on that score the selectors got it spot on, with several players suggesting they would not be out of place starting for their franchises.

Certainly some of the franchise coaches can feel comfortable with some of their reserve options after this game, which predictably was played in a Barbarians running rugby spirit but in which, as Pienaar said, it almost looked like it was Johan du Toit’s men who had been together for a couple of months and not the Cheetahs.

In mitigation for the Cheetahs it should be considered that though their opponents were mostly fringe players, they were players who have been on a competition footing at their franchises in recent weeks and many of them boasted at least some recent game time against the Cheetahs’ nil.

The last time the Cheetahs played was in their preparation series rout of the Eastern Province Elephants two months ago.

Speaking of the Elephants, they started the preparation series with former Sharks flyhalf Inny Radebe as their skipper and the visiting No 10 took full grasp of the opportunity offered to him in this game.

Apart from delivering a mostly accurate kicking display from the tee, the Eastern Province player was also a calm presence in directing the play from the pivot position.

The Cheetahs‚ still angered by their exclusion from next year's newly revamped PRO16 competition‚ believe South Africa's entrants must be determined ...
Sport
6 months ago

Behind a pack that was well led by Du Toit and featured several stand-outs, Radebe gave good service to his impressive midfield combination of Cornel Smit and Shayne Bolton, while starting wings Leolin Zas in particular and Jamba Ulengo also impressed and both featured on the try-scoring sheet.

Fullback Richard Kriel also had a good game and capped it with the intercept try that killed off any thoughts of a Cheetahs comeback with five minutes to go.

The score gave the Invitation team a 15-point advantage and rendered Brandon Thomson’s second try in the match for the Cheetahs as no more than a consolation.