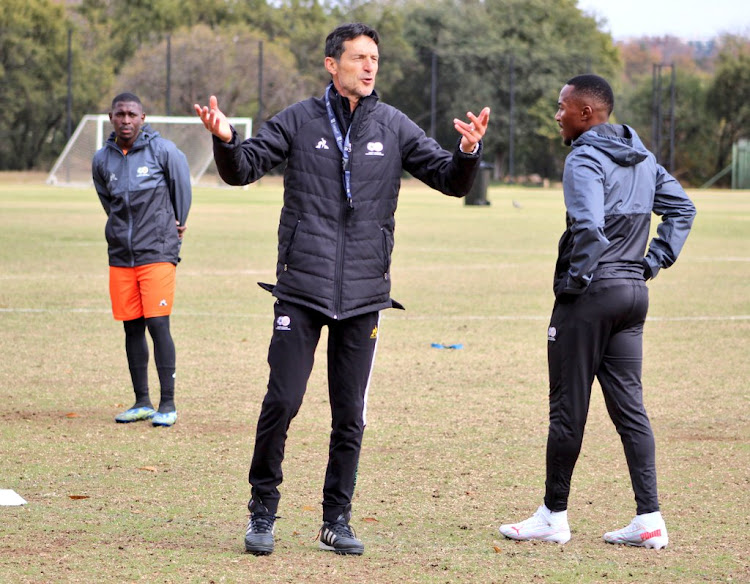 With new head coach Hugo Broos having not attended the match to receive his second jab of his Covid-19 vaccination in native Belgium‚ this leaves new SA assistant Helman Mkhalele in charge on the bench alone.

Chaos can be an overly-utilised verb‚ but following three players – England-based Percy Tau and the SuperSport United midfield duo of Teboho Mokoena and Sipho Mbule – being ruled out of the camp due to Covid-19‚ the first match of a new era is certainly in some state of disarray.

Bafana Bafana were dealt a huge blow before their international friendly match against Uganda in Soweto on Thursday after the talismanic Percy Tau ...
Sport
11 months ago

Despite Bafana team doctor Tshepo Molobi’s assurances that the correct measures have been taken to avoid the spread of Covid-19‚ there are question marks too on whether more players or coaching staff can be affected.

Molobi on Wednesday afternoon recapped on what has transpired since Bafana’s last press conference on Monday.

“As I explained [on Monday] all active participants of the team‚ prior to getting together‚ did a first round of Covid-19 tests. This is now done at least 72 hours prior to getting into the camp‚” Molobi said.

“All were cleared and hence deemed fit to participate in the match. I had made mention of the two positive cases that we detected [Tau and Mokoena] and I think those were dealt with‚ and the third close contact case [Mbule].

“Subsequent to that we did a second round of tests yesterday‚ and the results came back and earlier today with all tests coming back negative with the exception of Coach Cedomir Janevski.

“Subsequently we promptly put him in quarantine‚ as per requirement. He is currently well – he hasn’t raised any complaints in terms of symptoms‚ your headaches and so on.

“Let me just hasten to add that Coach Janevski got his first dose of the Pfizer vaccine last week and that’s possibly the reason why he is feeling well.

“But also let me hasten to add that there is also the possibility that subsequent to that vaccine that could also have led to the situation we are in now where we find the results positive.

“But we cannot conclude on that‚ and as a result we needed to activate all protocols in order to ensure the safety of everybody in the team.

“We did another test on the coach this afternoon to see if that [the vaccine] is the reason for his positive test or not. I cannot further elaborate on that because it’s a somewhat lengthy process.”

Bafana Bafana first assistant coach Čedomir Janevski has warned that Uganda are a dangerous counter attacking team that can also hurt their opponents ...
Sport
11 months ago

Molobi was asked for clarity on how the medical staff can be confident Janevski had not spread Covid-19 to other members of the squad.

“Let me just highlight one important issue – that immediately when the team gets in camp we activate stringent measures within the camp to mitigate against the spread‚ if there is any such case that’s detected‚” the doctor said.

“And I’m talking about measures we all know that are practised worldwide – regular sanitising‚ social distancing wherever necessary‚ masking all the time.

“Also at the hotel we are allocated separate facilities so there isn’t any mixing with other persons outside the team members.

Molobi said the coach would quarantine for 10 days.