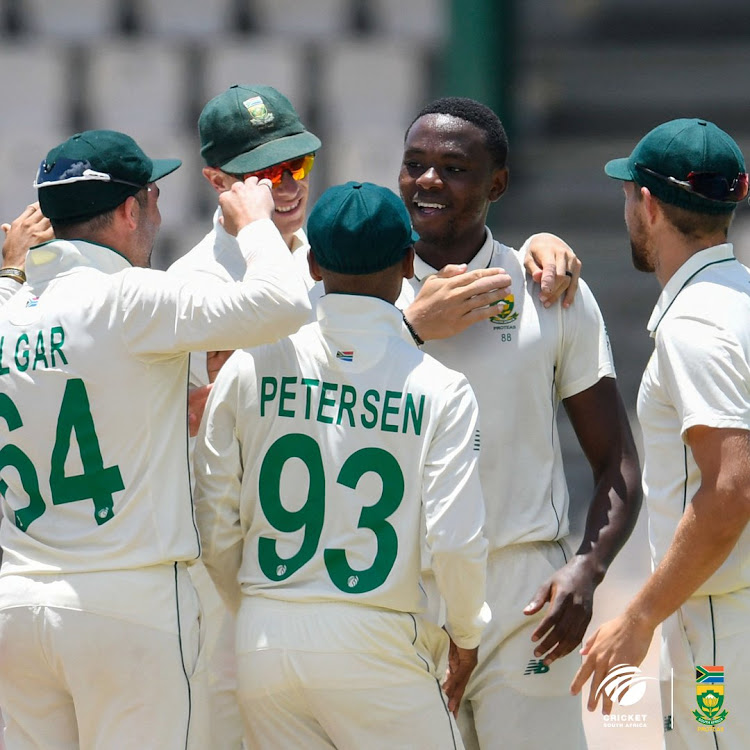 Dean Elgar and his charges will be determined to win the final and second test to take the series 2-0.
Image: Cricket South Africa/Twitter

Captain Dean Elgar is eyeing a clean sweep of the series against the West Indies in St Lucia and wants a massive win in the opening Test to be a catalyst for better things ahead for this Proteas side.

The Proteas thrashed their hosts by an innings and 63 runs in the first Test at the Daren Sammy Cricket Ground to take a 1-0 lead.

The South Africans may have had the upper hand‚ capitalising on a woeful batting display from the West Indies‚ but the host were not bad with ball in had and will be eager to make amends and level the series.

The home team bowled well in patches and that will be upper most of Elgar’s mind going into the series-deciding Test.

SA fast bowler Kagiso Rabada took five wickets as the tourists cruised to victory over West Indies by an innings and 63 runs before lunch on day ...
Sport
1 year ago

“In saying that‚ it would be a sin if we take the foot off the gas [going into the second and final Test on Friday]. I want a 2-0 series victory against the West Indies.

“Winning one game does not necessarily create a lot of success‚ but winning two games and winning a series is something that I am really going to be pushing for.”

The South Africans could not put a foot wrong in the first test as almost everything went their way‚ with Kagiso Rabada and Lungi Ngidi cantering two five-wicket hauls apiece‚ and Quinton de Kock effortlessly smashing his highest test score of 141.

“It is nice when everything comes together‚” said the 34-year-old skipper who was announced as Proteas test captain in March.

“I have always been the guy that will always try and find a negative somewhere‚ but yeah it was great to see the guys put up their hands.

“Lungi [Ngidi]‚ KG [Rabada] and Anrich [Nortje] with the ball‚ and Keshav [Maharaj] on day three when he had to bowl put up his hand.

“Then our batting unit‚ Quinton scoring another Test hundred and his highest Test score‚ it was brilliant from his side and Aiden and Rassie as well.

“I’m happy with our bowlers’ performances and with Quinton’s performances‚ and rightly so getting the man of the match award.”

The Proteas will be determined to win the second and final Test‚ which starts on Friday‚ at the same venue to clinch the series 2-0.