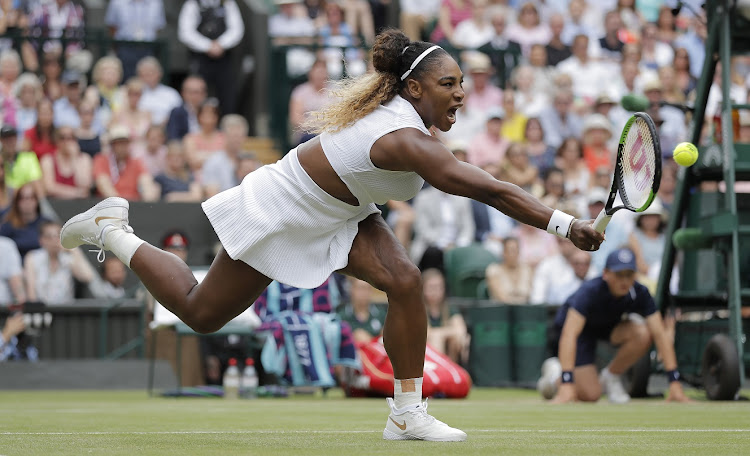 Serena Williams of the US at full stretch in her defeat to Simona Halep in the women's singles final on Centre Court of the 2019 Wimbledon tennis championships at the All England Lawn Tennis Club in Wimbledon on July 13 2019.
Image: GETTY IMAGES/ TOM JENKINS

Opportunity knocks for Serena Williams on the grass courts of Wimbledon next week when she faces a diminished field on her best surface at the famous All England Club.

Williams, 39, continues her quest for a record-equalling 24th Grand Slam title, but her inconsistency has left many to wonder if the hard-hitting American has the mental and physical strength to string together seven high quality matches.

The combination of a fast surface that favours power hitters like Williams and a field in which rivals such as Ash Barty and Simona Halep are competing after injury, plus Naomi Osaka missing for personal reasons, opens the door for Williams.

Naomi Osaka has withdrawn from this month’s Wimbledon championships for personal reasons but her agent said on Thursday that the world number two ...
Sport
1 year ago

“This is her golden opportunity,” Evert said.

“If there was ever a year that has looked good in the last few years, if there ever was a Grand Slam she is capable, more than capable, of winning, it would be this year’s Wimbledon.”

Other threats to Williams, apart from top seed Barty and defending champion Halep, including Bianca Andreescu, Aryna Sabalenka, Barbora Krejcikova and Karolina Pliskova, have yet to establish themselves as great grass court players, Evert said.

“But there’s always two sides to any coin. This new generation is fearless and confident.”

Fearless and confident is an apt description of 17-year-old Coco Gauff, who took Wimbledon by storm in 2019 when she beat former champion Venus Williams en route to the fourth round, where she bowed out to eventual title winner Halep.

Gauff made the French Open quarter-finals this month and, even though her Wimbledon preparations suffered a blip when she lost to Anastasija Sevastova in a warm-up event on Wednesday, she is poised to take the next step in her young career.

Serena Williams’ wait for a record-equalling 24th Grand Slam singles title goes on after the American was beaten 6-3 7-5 by an inspired Elena ...
Sport
1 year ago

“She has developed her skill set to another level during the clay court season,” Evert said.

“She got better and better with each tournament. I think if her serve is on, she could very well get to the second week, even make a quarter or a semi, very possible at Wimbledon.”

“I think she could potentially absolutely get to late in the event, semis, finals. It’s conceivable if things go well.”