All roads lead to Wimbledon for Roger Federer 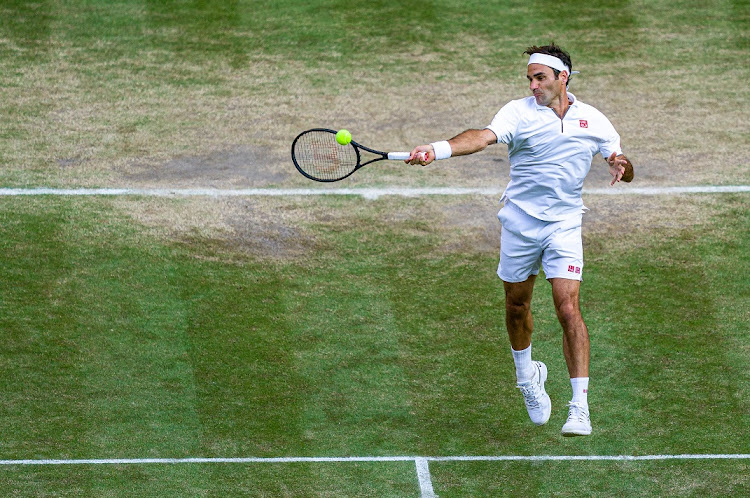 Roger Federer of Switzerland plays a forehand in his men's singles semifinal against Rafael Nadal of Spain at The Championships - Wimbledon 2019 at the All England Lawn Tennis and Croquet Club on July 12, 2019.
Image: GETTY IMAGES/ ANDY CHEUNG

For Roger Federer, Wimbledon 2021 will not only be the last Grand Slam he contests before celebrating the “big four-oh” but also a chance to put behind him the memory of his 2019 heartbreak at the grass court major.

The Swiss has held aloft the gilded Challenge Cup a record eight times. But equally memorably, he lost a chance to win a ninth title in 2019 when he astonishingly failed to convert two championship points against Novak Djokovic.

That near-miss prevented him from winning a record-extending 21st Grand Slam title, and since then a combination of injuries and the Covid-19 pandemic have conspired to curtail his on-court action.

When Wimbledon’s favourite son walks out on the manicured lawns next week, he will be hoping his surgically repaired knees can deal with the rigours of winning seven best-of-five-set matches.

Roger Federer marked his return to the Grand Slam arena in dazzling fashion with a 6-2 6-4 6-3 first-round defeat of qualifier Denis Istomin at the ...
Sport
1 year ago

Exactly how Federer, who turns 40 in August, will be able to cope with such demands on his body is something that even he does not know because since that fifth-set tiebreak loss to Djokovic in July 2019, he has played only 34 matches, including just eight since February 2020.

Before injuries started disrupting his career from 2016, Federer regularly contested more than 70 matches a year.

“It’s a huge challenge for me. Everybody who has multiple surgeries or a tough surgery knows what I’m talking about,” said Federer, who had left knee surgery in 2016 on a torn meniscus before going under the knife twice in 2020 on his right knee.

“Things don’t come easy. You second-guess yourself ... and that’s sometimes the biggest worry: the worry of pain or the worry of how you’re going to feel the next day or when you wake up.

“All this stuff, it takes a little bit of a toll on you sometimes.”

His lack of match-fitness will be severely tested not only by the Djokovics of this world — who incidentally will be eager to flatten anyone who tries to stop him from joining Federer and Rafael Nadal on 20 majors — but also by an army of younger and fitter players.

The likes of 20-somethings Stefanos Tsitsipas and Alexander Zverev no longer fear facing Federer and have beaten the Swiss great on multiple occasions.

Federer has made no secret that at this stage of his career, anything he does or does not do on a tennis court is done with the sole purpose of making sure he is in the best shape possible to make another title run at Wimbledon.

With that in mind, he quit the French Open after winning his third-round match. It was a move that annoyed many critics who felt that if anyone else had pulled out to protect their body, they would have been crucified for using another Grand Slam tournament as a dress rehearsal.

Others rushed to defend the world No 8.

“Roger has earned the right to do anything he wants in tennis right now,” American great Chris Evert said.

“Wimbledon is his dream, that’s the golden tournament for him. He should be excused for any withdrawal he has.”

Former world number one Roger Federer, who is targeting a record 21st Grand Slam title at Wimbledon, withdrew from the French Open on Sunday, a day ...
Sport
1 year ago

Fellow ESPN analyst John McEnroe said the bigger concern was that: “He played a four-hour match, won that, then defaulted. It’s hard to say how he was feeling that next day, if he could have gone on?”

Fast forward a few days and a second round defeat on grass in Halle, the earliest exit Federer has suffered in 18 appearances at the Wimbledon warm-up event he has won 10 times, was a further setback caused by what the Swiss described as a “negative attitude”.

However, with his focus clearly on equalling Martina Navratilova’s overall record of nine Wimbledon titles, as Eurosport pundit Mats Wilander put it: “He’ll be as fired up as the Rolling Stones playing at Wembley.”