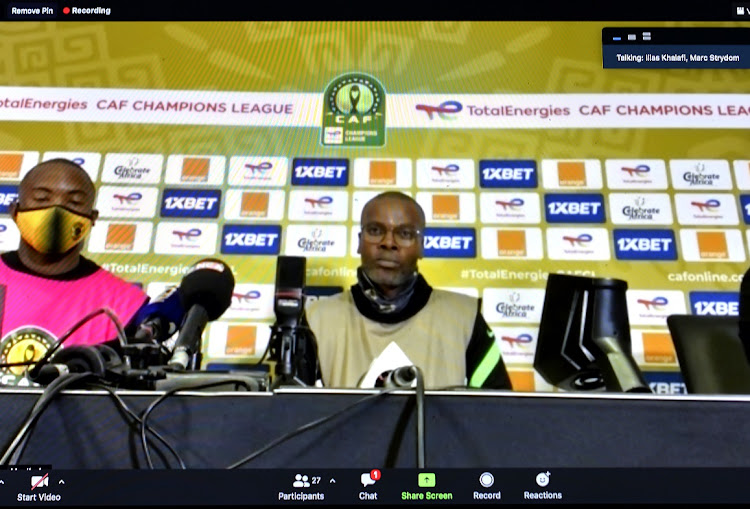 Kaizer Chiefs caretaker-coach Arthur Zwane has dropped a hint that midfielder or attacker Lebogang Manyama may be available for the second leg of the semifinal against Wydad Casablanca at FNB Stadium on Saturday.

Chiefs earned a healthy 1-0 lead for the away leg in Casablanca last Saturday, mostly through a disciplined defensive display.

Zwane, in his pre-match press conference to the second leg (kickoff 6pm), seemed determined to play his cards close to his chest, only wanting to reveal that Khama Billiat and Dumisani Zuma remain unavailable due to long-term injuries.

“We don’t know at the moment, except for Khama and Dumisani [who are out]. We will just assess everybody now and do the final preparations,” the coach said.

“We are also still waiting for the Covid-19 Test results, which will guide us on who’s going to be in the starting XI, and who’s not available.”

Zwane was pressed on whether Manyama will be available.

“Lebo is one of the players who did not travel with us because of a niggling knee injury. So we are hoping that by now he would be ready,” he said.

“We’re waiting for him now. Because he trained in dribs and drabs, so we are just hoping that he might be available.

“As I said it might be a case of he’s not ready for this one, but looking ahead to the final he might be available for that one, and maybe by then everyone will be available.

“But yes, at the moment we don’t know because we are still waiting for the Covid Test results.”

Zwane and fellow caretaker Dillon Sheppard will again call the shots from the bench, with new head coach Stuart Baxter, part of the brains trust over the two legs, still in the stands as he awaits his work permit.

Chiefs, who had never reached the group stage in the competition, are seeking to make history by reaching the final.