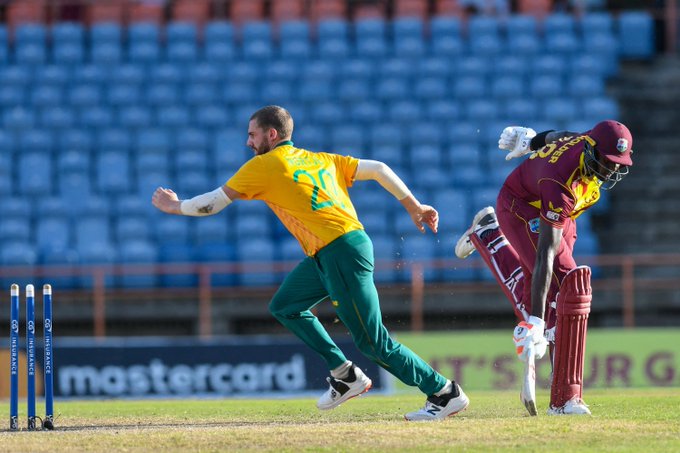 The Proteas had a bright start with the bat. They scored 81 runs from the first eight overs and just another 85 from the next 12 overs but still managed to get over the line.
Image: @WindiesCricket/ TWITTER

South Africa spinners Tabraiz Shamsi and George Linde stifled West Indies' chase as the visitors claimed a 16-run victory in the second Twenty20 international on Sunday to level the five-match series at 1-1.

After being sent into bat in St George’s, Grenada, the Proteas of South Africa posted a below-par 166 for seven in their 20 overs.

However, the home side's fast start was halted by the spin duo and they were restricted to 150 for nine.

Left-arm wrist spinner Shamsi recorded figures of 1-16 in his four overs and the tall orthodox Linde posted 2-19 as they frustrated the home side in the middle of the innings and took the momentum out of their chase.

Opener Evin Lewis smashed 71 from 35 balls as West Indies cruised to an eight wicket victory over South Africa with 30 balls to spare in the first ...
Sport
10 months ago

West Indies had cruised to an eight-wicket victory in the first match with 30 balls to spare on Saturday, but the tourists were vastly improved with their skills with the ball, as well as in the field.

The Proteas also made a fast start to their innings as opener Reeza Hendricks (42 from 30 balls) and captain Temba Bavuma (46 from 33 balls) took the attack to the bowlers, but once they were out the innings stuttered.

They scored 81 runs from the first eight overs and just another 85 from the next 12 as the West Indies bowlers slowed the scoring rate with a mix of slower balls and yorkers.

Seamer Obed McCoy (3-25) and off-break bowler Kevin Sinclair (2-23) were the pick of the home attack.

The third match in the series will be played at the same venue on Tuesday.