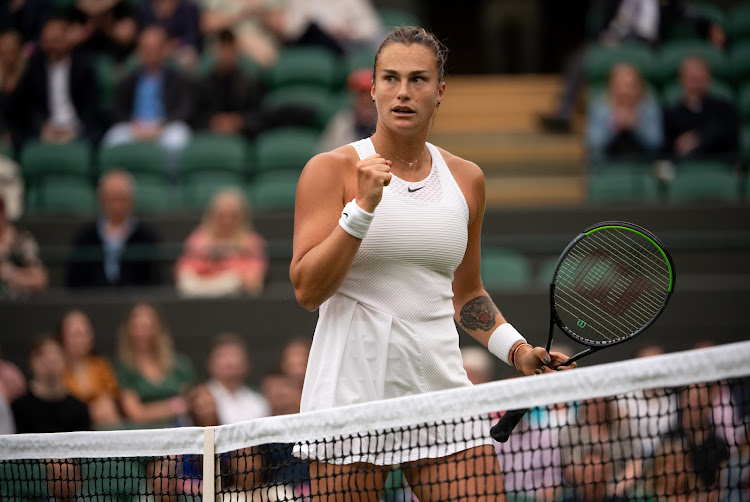 Second seed Aryna Sabalenka struck a barrage of winners to blitz past Romanian qualifier Monica Niculescu 6-1 6-4 on Monday and reach the second round of Wimbledon.

The withdrawal of Naomi Osaka and Simona Halep from the grasscourt Grand Slam, which was cancelled last year due to the Covid-19 pandemic, meant world number four Sabalenka is at her highest seeding at a major.

With persistent rain preventing play on the outside courts, the Belarusian kicked off the Championships under the closed roof on Court One and set the green grass on fire with her aggressive tennis.

The atmosphere there was unbelievable. I was nervous about the surface because I never played on the new grass... I didn't really know what to expect

"In the beginning I was really nervous to open the Wimbledon and also be first playing on first court," Sabalenka told reporters.

"I was nervous a little bit because I haven't played in the stadiums at Wimbledon.

"The atmosphere there was unbelievable. I was nervous about the surface because I never played on the new grass... I didn't really know what to expect."

Nerves, however, did not have an impact on her game as the 23-year-old, 10 years younger than 191st-ranked Niculescu, produced winners at will off both forehand and backhand to leave Niculescu powerless and rooted to the baseline during the match.

Niculescu, who reached a career-high 28th ranking in 2012, is one of the most unorthodox players on the circuit and employed her sliced forehands and chopped returns in abundance but it was not enough to derail the Belarusian.

Sabalenka was particularly severe on Niculescu's weak serve as she pummelled 15 return winners with the Romanian managing to hold her serve just three times.

A frustrated Niculescu tried an underarm serve in the third game of the second set but could only hit it into the net, bringing a smile on Sabalenka's face.

Opportunity knocks for Serena Williams on the grass courts of Wimbledon next week when she faces a diminished field on her best surface at the famous ...
Sport
1 year ago

Sabalenka jumped to a 3-0 lead in the second set with a double break but started facing some problems on her own serve and was broken twice as her unforced errors climbed in the face of some resolute defence from her opponent.

But she regained her composure and sealed victory in 75 minutes with a crushing forehand down the line. It was her 47th winner of the match against 30 unforced errors.

Niculescu managed only eight, most of them at the net.

Sabalenka will take on either American qualifier Danielle Lao or British wildcard Katie Boulter in the second round.