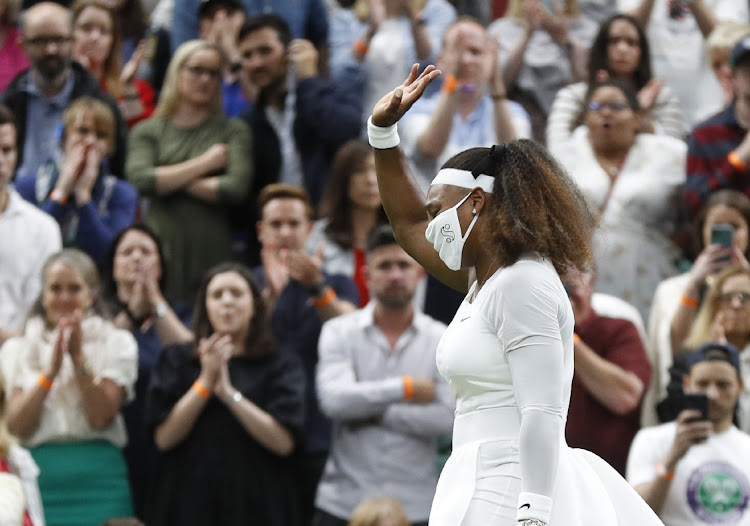 Serena Williams of the US leaves court as she retires from her first round match against Belarus' Aliaksandra Sasnovich after sustaining an injury, in London, Britain, on June 29 2021.
Image: REUTERS/ PETER NICHOLLS

Tennis great Serena Williams limped out of Wimbledon in tears on Tuesday after an ankle injury forced her retirement early in a first-round match against unseeded Belarusian Aliaksandra Sasnovich.

The American sixth seed, a seven-time champion bidding for a record-equalling 24th Grand Slam singles crown, was clearly in pain early in the first set on a slippery Centre Court and limped off for treatment while 3-2 ahead.

Williams returned after a lengthy break but the distress was evident before preparing to serve at 3-3 after Sasnovich had levelled.

The 39-year-old, who had been 3-1 up before the injury, sank to the grass before being helped off the court.

Serena Williams will not be travelling to Tokyo for the Olympic Games, the 23-times Grand Slam singles tennis champion said on Sunday without giving ...
Sport
5 months ago

“Brutal for @serenawilliams but centre court is extremely slippy out there. Not easy to move out there,” Britain’s Andy Murray said on Twitter.

Sasnovich commiserated with an opponent who had never gone out in the first round at Wimbledon in her previous 19 visits.

“I'm so sad for Serena, she's a great champion,” said the world number 100. “It happens sometimes.”

Eight-time men’s singles champion Roger Federer expressed shock at her departure and voiced concern about the surface, with the roof closed on the court on a rainy afternoon.

His first-round opponent Adrian Mannarino of France also retired with a knee injury after a slip.

Naomi Osaka has withdrawn from this month’s Wimbledon championships for personal reasons but her agent said on Thursday that the world number two ...
Sport
5 months ago

“I do feel it feels a tad more slippery maybe under the roof. I don't know if it's just a gut feeling. You do have to move very, very carefully out there. If you push too hard in the wrong moments, you do go down,” Federer said.

“I feel for a lot of players, it's super key to get through those first two rounds because the grass is more slippery, it is more soft. As the tournament progresses, usually it gets harder and easier to move on.”