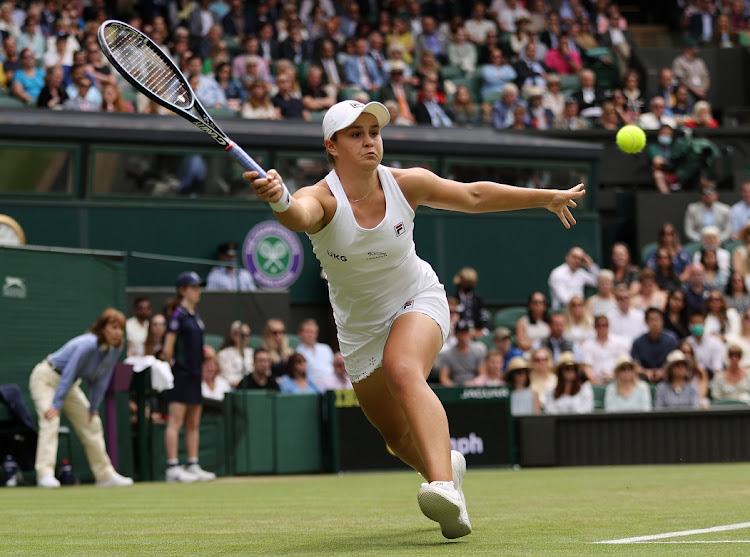 Ashleigh Barty of Australia plays a forehand during her ladies' singles second round match against Anna Blinkova of Russia on day four of The Championships - Wimbledon 2021 at the All England Lawn Tennis and Croquet Club in London on July 1 2021.
Image: Clive Brunskill/Getty Images

World number one Ash Barty moved into the third round at Wimbledon but not without a battle as she overcame spirited Russian Anna Blinkova and her own inconsistency in a 6-4 6-3 win on Thursday.

The top seed never looked in danger against the 89th-ranked Blinkova, but it was not plain sailing for the Australian scrapper.

Her serve, so often a dependable weapon, was at times wayward as she hit nine double faults and was broken three times, while her 33 unforced errors suggest she has some way to go to get fully sharp on the grass.

Barty, whose sole Grand Slam title came at the 2019 French Open, has never gone beyond the last 16 at Wimbledon.

She ultimately had too much firepower for Blinkova, however, and wrapped up victory after 90 minutes when her opponent swiped a forehand long.

“A few things didn’t feel quite right today. That’s half the battle in sport, being able to find a way when it’s not feeling all that great,” Barty said.

“I felt like when my back was against the wall today I was able to bring the good stuff. It just wasn’t quite there all the time.”

Next up for Barty will be an encounter with 64th-ranked Czech Katerina Siniakova, who booked her spot in the third round with a 4-6 6-2 6-2 win over CoCo Vandeweghe.

There are certainly creases to iron out in the Australian’s game before then.

Injured Halep pulls out of Tokyo Games after Wimbledon withdrawal

World number three Simona Halep has become the latest big-name tennis player to withdraw from the Tokyo Olympic Games after the Romanian said she ...
Sport
5 months ago

After taking 49 weeks out of the sport as tennis closed down due to the Covid-19 pandemic, Barty returned to the tour exhibiting the sort of consistency that has seen her finish the campaign at the top of the rankings for the last two years.

This season she has won more titles, reached more finals and beaten more top-10 opponents than anyone else on tour, but against Blinkova there was room for improvement.

Barty has fired down more aces than anyone this year, but her serve was vulnerable in the afternoon sun on Centre Court.

She was broken twice in the opening set, with some of her issues self-imposed as the double fault count mounted.

“Not my best serving day. But that happens as well. I felt like I was just out of rhythm a little bit. A few technical things weren’t quite feeling spot on,” she said.

Barty eventually came through the opener with three breaks of her own and then threatened to run away with the match as she won four games in a row to take a 2-0 lead at the start of the second set.

Blinkova dug in, however, hitting back against the Barty serve to level at 2-2 and holding firm until the top seed turned the screw with two further breaks to close out the contest.