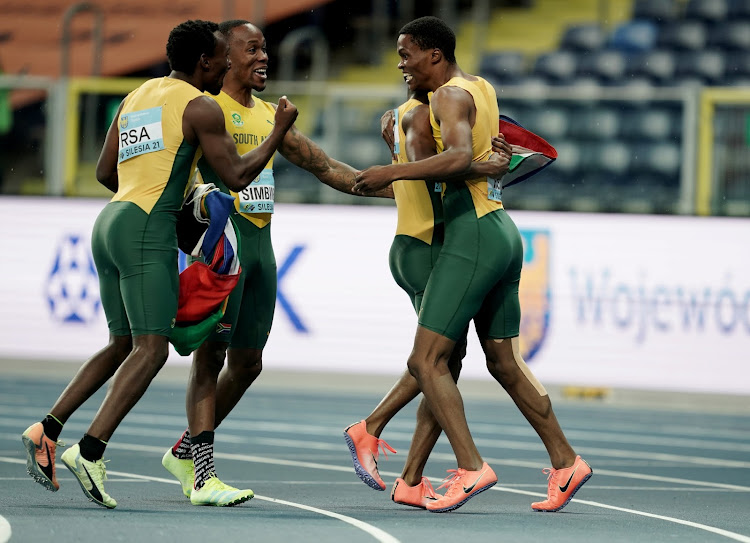 South Africa’s speedsters have achieved an Olympic first by filling all nine spots available to them across the three men’s sprints for the Tokyo Games.

For the first time since track-and-field events were limited to a maximum of three entries per nation nearly a century ago‚ South Africa is delivering a full house in the 100m‚ 200m and 400m.

The eight sprinters account for nearly a third of South Africa’s 25 individual athletes who made World Athletics’ Olympic rankings when the qualifying window closed early on Wednesday (SA time).

From fielding just two sprinters at London 2012‚ Anaso Jobodwana and Oscar Pistorius‚ the benefits of South Africa’s so-called sprint revolution over the past several years are visible.

But only four women have made the Tokyo cut‚ which would equal the country’s smallest post-isolation female track-and-field contingent of Atlanta 1996.

There is a chance that one or two more women could still squeeze in‚ but they will need other athletes in their events to withdraw between now and early next week‚ when entries must be finalised.

Serena Williams will not be travelling to Tokyo for the Olympic Games, the 23-times Grand Slam singles tennis champion said on Sunday without giving ...
Sport
10 months ago

The fourth podium prospect is Ruswahl Samaai‚ one of two long-jumpers who are basically sprinters who enjoy playing in sand.

But elsewhere in the sport locally there are major gaps that should cause administrators sleepless nights.

The drop in women comes straight after their largest contingent‚ 13‚ at Rio 2016.

The total team size is down from 39 five years‚ and there are several worrying areas of concern.

Remember when Hezekiel Sepeng and Mbulaeni Mulaudzi won Olympic silver medals in the 800m at Atlanta 1996 and Athens 2004? Not a single qualifier in the men’s race for Tokyo.

In fact‚ of the four track events from 800m to 10‚000m‚ in both the men and women‚ only Dominique Scott and Precious Mashele have qualified.

Remember when Hestrie Cloete and Jacques Freitag ruled world high jump in 2003? No qualifiers there.

Of SA’s 25 athletes‚ 22 made it by achieving automatic qualifying standards and three through world rankings.

They were Jobodwana‚ the 2015 world championship 200m bronze medallist‚ Thapelo Phora and Marc Mundell‚ the last-placed qualifiers in the 400m and 50km walk.

Of the 25‚ 15 are veterans of Rio. The three returning women are Scott‚ Irvette van Zyl and Wenda Nel. Comrades queen Gerda Steyn is the only new face.

Yet three of SA’s four track and field medallists from Rio will not be in action in Tokyo.

Caster Semenya‚ not willing to take testosterone-lowering medication to remain in the 800m in which was the two-time Olympic champion‚ opted to switch to the 5‚000m where she was unable to meet the qualifying time.

Long-jumper Luvo Manyonga has been banned for a doping violation and Sunette Viljoen‚ the javelin silver medallist in Rio‚ was unable to qualify.

The men will have a few names added to the squad to fill up the 4x100m and 4x400m relay squads. And there is a chance for Zeney van der Walt (400m hurdles) and Jo-Ane van Dyk (javelin) still to make it.

Both missed out on qualifying by a single spot on the world rankings‚ which use points calculated from performances. Van der Walt‚ with 1‚188 points‚ was a mere single point behind the last-placed qualifier. Van Dyk was 12 points adrift.

But they would crack the nod should just one of the qualifiers above them withdraw — that’s one of 39 for Van der Walt and one of 32 for Van Dyk.

The chances of this happening is not beyond the realm of possibility considering World Athletics has retained on its qualifying lists athletes with doping violations. Many of those athletes are expected to drop off.

Troubled long-jump maestro Luvo Manyonga has been banned for four years for a doping violation that in the end he didn’t even try to contest.
Sport
11 months ago

While Manyonga‚ who was recently banned‚ is certain to fall off‚ both Horn and Shange are still listed as provisionally suspended.

Shange successfully lobbied to have his suspension temporarily lifted last month so he could try qualify for the Games‚ and he competed in two events before the suspension was reinstated on Wednesday.

But there must be something amiss that a nation has almost as many “qualified” athletes with doping violations as it does qualified women.