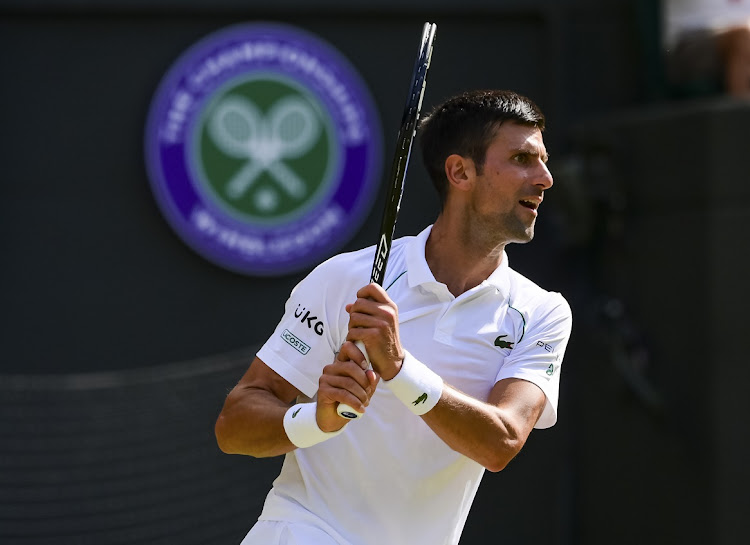 Novak Djokovic of Serbia hits a backhand against Denis Kudla of the United States in the third round of the men's singles on day five of The Championships - Wimbledon 2021 at the All England Lawn Tennis and Croquet Club on July 02, 2021.
Image: TPN/Getty Images

Novak Djokovic roared into the fourth round at Wimbledon, raising his game, and occasionally the decibel levels, on Court One to dispatch plucky American qualifier Denis Kudla 6-4 6-3 7-6(7) on Friday.

World number one Djokovic spent much of the third-round encounter cruising on autopilot but there were moments when the going got tough for the Serb against the 114th-ranked Kudla.

Djokovic, however, knows how to turn up the volume, literally at times, and accompanied by a few chest-thumping shouts, he dug deep to subdue the fiery Kudla and continue onwards in his quest for a sixth Wimbledon title.

Djokovic upped the ante at key moments in the first two sets to take the match away from Kudla and when his back was against the wall in the third, trailing 4-1 and then by the same score in the tiebreak, he showed a stubborn determination to hang tough.

Federer gets his sparkle back as sun shines at Wimbledon

The sun finally came out at Wimbledon on Thursday and eight-time champion Roger Federer got his old sparkle back on Centre Court to eclipse Richard ...
Sport
3 months ago

Few can match Djokovic when it comes to his wilful refusal to buckle under pressure and the Serb has an inkling of why that stubborn streak is embedded deep in his sporting soul.

“Part of it is genes, my family, the way I have grown up during difficult times in the 90s for my country,” he said referring to the Nato bombings of Belgrade during the Kosovo War.

“Failure was never an option for me or my family, we had to find a way to fund the basic needs to survive ...

“I spent a lot of time in the mountains with wolves and this is wolf energy there. I am not kidding,” he added after setting up a fourth round clash with Chile’s 17th seed Cristian Garin.

A lot is riding on this Wimbledon for Djokovic. He is halfway to the calendar-year sweep of all four majors and can also match Roger Federer and Rafa Nadal’s men’s record haul of 20 Grand Slam titles.

On current form, it will take a lot to knock him off course, but there were times when Kudla at least managed to rattle his cage.

Djokovic seemed to be playing with the handbrake on for much of the first set, but he tugged on the throttle when it mattered, breaking the American for the first time to take the opener and then again to open a 2-0 lead in the second.

Kudla, however, broke back, leading an optimistic fan to shout that he was “under the skin” of the Serb.

Djokovic, perhaps offended by the affront, was brutal in his retribution.

Clinical Novak Djokovic glides past Kevin Anderson into third round

Elsewhere, this time not even Centre Court’s roof could rescue Andy Murray as the home favourite and two-time champion’s dream of a deep Wimbledon run were crushed by Canada’s Denis Shapovalov in the third round.

Twice this week the 34-year-old Murray had rolled back the years with late-night wins under the roof, but Shapovalov proved a step too far as the 22-year-old left-hander dished out an emphatic 6-4 6-2 6-2 beating.

Murray, back in the singles at Wimbledon for the first time since 2017 after two hip surgeries, had thrilled his fans with dramatic victories over seeded Georgian Nikoloz Basilashvili and German qualifier Oscar Otte on Monday and Wednesday.

Some had even begun to fantasise about the metal-hipped Murray making an unlikely tilt for a third Wimbledon title.

Reality hit home, however, as Shapovalov showed no mercy with a scintillating display to put himself in the Wimbledon last 16 for the first time and deny Murray a 12th visit to the fourth round at the All England Club.

Murray walked off to a standing ovation and will now focus his attention on the Tokyo Olympics where he will be defending the singles title he won in London and Rio de Janeiro.

While Murray said there were positives to take from a memorable week, there was also frustration.

“I want to be performing better than what I did here. Even though there were some great moments,” the former world number one said.