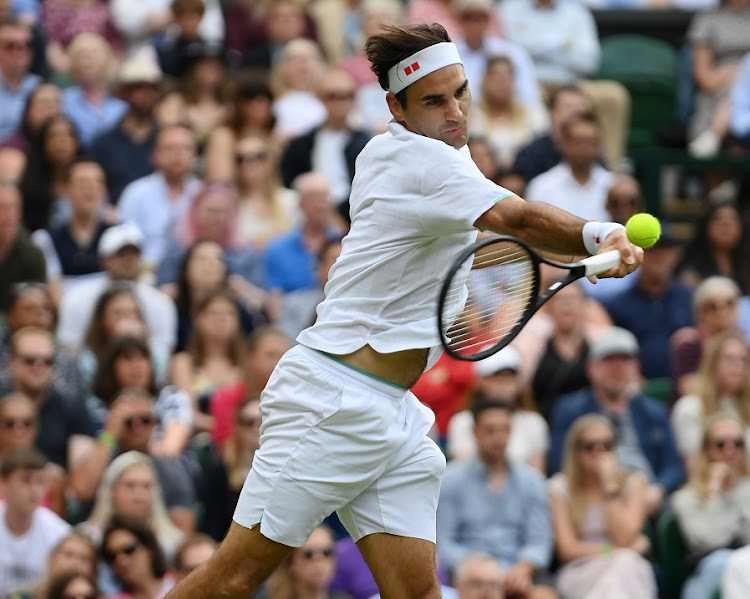 Roger Federer of Switzerland plays a forehand in his men's singles third round match against Cameron Norrie of Great Britain on day six of The Championships - Wimbledon 2021 at the All England Lawn Tennis and Croquet Club on July 03, 2021.
Image: Mike Hewitt/Getty Images

London — Apparently if there was a perfect time to topple Roger Federer early at Wimbledon, this was the year — so believed Cameron Norrie and his vast legion of British fans.

Hopes that the 29th seed could stop Federer’s pursuit of a men’s record ninth All England Club title reached fever pitch after 338th-ranked British wildcard Emma Raducanu had defied the odds to reach the last-16 moments before Norrie walked onto Centre Court for his showdown with the Swiss supremo.

The fact that Federer had barely played in 18 months and was still in the tournament after his lucky escape against Adrian Mannarino in the first round, with the injured Frenchman quitting when the match was at two sets all, also raised hopes of an upset win for the last British man left in the singles draw.

But Federer, with his surgically patched-up knees and his 39-year-old battle-hardened body, showed that he is prepared to take as many knocks as it takes to keep alive his dreams of once again holding aloft the pineapple-topped Challenge Cup.

“Super relieved. It was a tough battle and it was so close. I’m playing at a high level now and things are going well for me,” a beaming Federer told the crowd after making it into the second week at the All England Club for the 18th time.

Federer gets his sparkle back as sun shines at Wimbledon

The sun finally came out at Wimbledon on Thursday and eight-time champion Roger Federer got his old sparkle back on Centre Court to eclipse Richard ...
Sport
6 months ago

Just what facing Federer on the world’s most famous tennis stage does to the nerves was evident in the opening game of the match when Norrie kept misfiring his left-handed serve to produce three double faults.

While he survived that inauspicious start, Norrie was left floundering in the seventh game when Federer broke him to love. That was enough to give the sixth seed the opening set.

The second set again started with a bit of misfortune for the Briton, who struck a ball that bounced into the stands and hit a little boy in the face. After making sure the child was okay, he tossed an official Wimbledon towel to the boy.

While the crowd applauded the gesture, Norrie’s own fortunes dipped further when Federer broke him for a 2-1 lead.

The Swiss, who turns 40 next month, held on to the advantage to take the set and appeared to be heading for a straight sets victory when he held break point at 5-5 in the third.

Instead a streaky backhand from Federer kept Norrie alive and within a flash it was the Swiss who was broken to love in the next game as he handed Norrie the set with a wild forehand.

Novak Djokovic roared into the fourth round at Wimbledon, raising his game, and occasionally the decibel levels, on Court One to dispatch plucky ...
Sport
6 months ago

If Norrie had been playing any other opponent, the moment would have been greeted with deafening cheers from 99% of the crowd. But playing the world’s most beloved tennis citizen, he had to make do with sharing the adulation on Saturday.

Norrie kept Federer on his toes by breaking back for 3-3 in the fourth before the 20-time Grand Slam champion survived a fall in the ninth game to break for a 5-4 lead.

A netted service return handed Federer his 104th win at his favourite tournament as he made it to the last 16 of a major for a record-extending 69th time.

Alexander Zverev feels the experience gained from deep runs at majors will prove crucial in his bid to become a Grand Slam champion one day after the German fourth seed reached the round of 16 at Wimbledon with a fighting win over Taylor Fritz.

The German, who also reached the fourth round at the All England Club in 2017, narrowly lost to Dominic Thiem in the US Open final in 2020. He also reached the Australian Open semi-finals last year and the same stage at this year’s French Open.

Next up for the German at Wimbledon will be Canadian 16th seed Felix Auger-Aliassime, who advanced to the last 16 when Australian Nick Kyrgios retired with an injury.