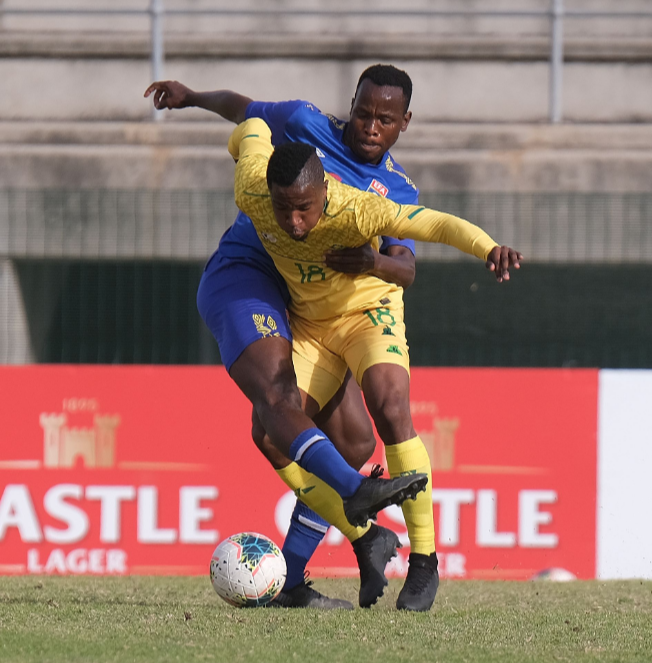 The win puts Bafana on top of Group A with a full haul of six points from their two games.

Eswatini were forced to play the second half with 10 men after their captain and top goalscorer, Felix Badenhorst, was handed his second yellow card in first-half stoppage time after he kicked Sphelele Mkhulise from behind.

Bafana Bafana have continued to do well in the Cosafa Cup despite the absence of assistant coach Helman Mkhalele and goalkeeper coach Luck Shiburi, who tested positive for Covid-19 on Monday and have since been in isolation.

Team doctor Tshepo Molobi confirmed on Wednesday that they would miss the remaining group fixtures.

Ahead of the group fixture, former Bafana star Mkhalele said he was confident his young squad would excel in the cup competition.

His team have certainly lived up to his expectations so far.

There were not many clear-cut opportunities from either side in the first half.

South Africa got off to a winning start in Group A of the Cosafa Cup at Nelson Mandela Bay Stadium on Tuesday, substitute Kagiso Malinga’s ...
Sport
1 year ago

In the 38th minute, Eswatini’s Ethan Brooks tried his luck on goal, but his attempt hit the side net.

Despite playing with one man down, the visitors launched a full-on attack and Bafana goalkeeper and skipper Veli Mothwa had to come to his team’s rescue again in the competition.

In the 48th minute, Eswatini’s Justice Figareido cruised through Bafana Bafana’s Bafana defence to find himself one-on-one with goalkeeper Mothwa, who comfortably blocked the ball to make the save.

And it came through Sibanyoni, who scored his first international goal, having been on the field for only two minutes.

He came on as a substitute for Kagiso Malinga in the 57th minute and it proved to be a brilliant call.

Bafana missed chances to extend their lead in the dying minutes of the game.

It was a bad miss with an open goal in front of him.

Bafana’s next match will be against Lesotho at the Nelson Mandela Bay Stadium on Tuesday (3pm).

Meanwhile, Lesotho claimed their first outright victory over defending champions Zambia in the Cosafa Cup with a come-from-behind 2-1 success yesterday.

Zambia looked to be headed for the perfect start when striker Justin Shonga gave them the lead just before the half-hour mark, having earlier struck the woodwork.

Shonga netted after Gamphani Lungu’s shot had been blocked into his path by Lesotho goalkeeper Sekhoane Moerane.

It looked at that stage as though it might be a comfortable win for Chipolopolo, but to their credit Lesotho came out firing it the second half, showing their desperation for a win after a 3-1 loss to Eswatini in their opening game on Monday.

Motebang Sera equalised on 70 minutes after being fed by Tumelo Khutlang, and then two minutes from time he grabbed a winner after good work on the right wing by Tumelo Makha.

The action continues in Group B today when West African guest nation Senegal will be back on the pitch hoping to make up for their opening game loss to Namibia.

Senegal showed they have plenty of skill in their squad and will hope for better against Mozambique (kickoff 3pm), who played to a 0-0 draw with Zimbabwe in their first game.

The earlier match will see Malawi take their bow in the competition as they play Zimbabwe in what is usually a fiery contest.

That game starts at noon.

The top two teams in each of the groups advance to the semifinals, which will be played on July 16. — Additional reporting by Cosafa