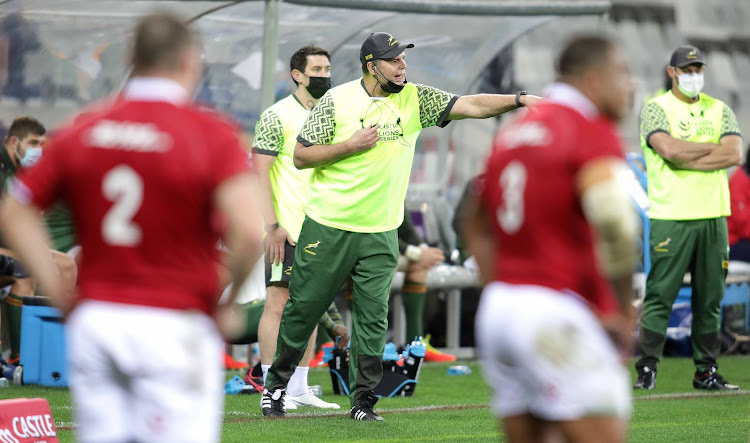 The national director of rugby wore his coach's cap again in the absence of Jacques Nienaber as SA A‚ actually a shadow Bok team‚ held on to inflict on the Lions the first defeat of their tour.

Erasmus was equally firm that a similar performance would not cut it in the rarefied atmosphere of a Test.

“That type of performance will not win us the Test series though‚ there is a lot of technical stuff we need to get right before next weekend‚” Erasmus pointed out.

“We expected our guys to run out of steam at the end after being stuck in our hotel rooms for a week and we only had two training sessions together as a team‚” said Erasmus.

The SA A team due to take on the British & Irish Lions may in look and feel resemble the Springboks‚ but the home side will not treat the clash at ...
Sport
2 weeks ago

The South Africans were made to work even harder when they lost two players to the sin bin just before half time.

That helped the Lions claw back some of the gains the hosts had made early in the match. The South Africans displayed poor discipline‚ even falling on the wrong side of the law at scrum time.

With so much time away from the training field due to Covid-19 protocols‚ both teams struggled to bring continuity to their game. It meant the decisive battles were won in the trenches.

“(It was) very intense‚ maybe not brilliant‚ but one where a lot of players showed massive guts and endeavour‚” said Erasmus.

If his team played to the predicted script‚ Erasmus got the same from the tourists.

“We also got from the Lions what we expected. Their physical approach and slick handling were expected‚ and they did not disappoint.

“That is exactly what we needed with a week to go before the first Test. We wanted to win this match and I am sure they wanted to as well. Maybe those two tries not given would have counted for them‚ but it worked in our favour tonight.”

Rassie Erasmus has strongly dismissed suggestions that the integrity of the British & Irish Lions series is in question after a spate of Covid-19 ...
Sport
2 weeks ago

Captain Lukhanyo Am lauded the performance of Cheslin Kolbe‚ who helped set up one of the two long range tries the home team scored on Wednesday.

“I thought Cheslin was outstanding‚” said Am.

"He brings so much energy and class to our team. He is a key performer and showed why. He covered so many positions today‚ it’s great to have him in the team.”

Erasmus said he is pleased that a large contingent of the squad will return from isolation in Johannesburg in the coming days‚ especially Springbok head coach Nienaber.

“Jacques is also the defence coach and this week he was coaching us virtually‚ so the way our guys responded was great.

“A number of players need some game time‚ but we will address that‚ as well as how to bring the Covid cases back in and manage their return to play‚” said Erasmus.

The team is yet to fully assess all their walking wounded but Willie le Roux (fullback) and Jasper Wiese (No 8) picked up knocks during the clash.