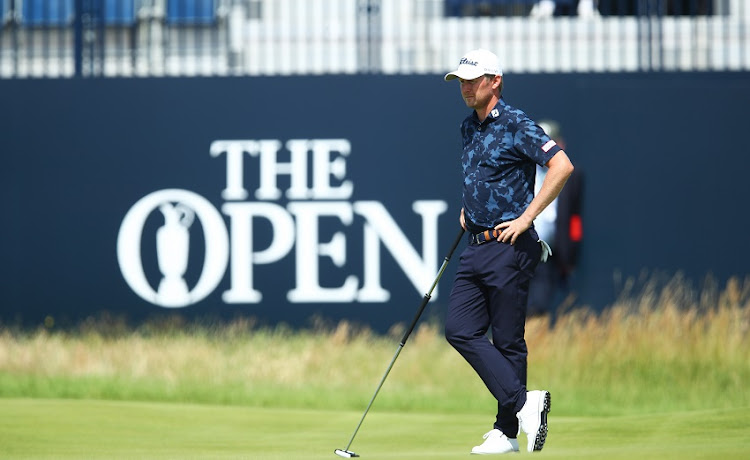 Justin Harding of South Africa looks on from the green of the 18th hole during Day One of The 149th Open at Royal St George’s Golf Club on July 15, 2021 in Sandwich, England.
Image: Christopher Lee/Getty Images

England's Danny Willett and Andy Sullivan along with South African Justin Harding set the early clubhouse target with rounds of 67 as the 149th British Open started in sunny conditions at Royal St George's on Thursday.

Canadian Mackenzie Hughes moved to five under par after 13 holes and American Jordan Spieth, the 2017 Open champion, made four consecutive birdies on the front nine to join Willett, Sullivan and Harding on three under.

The 2020 tournament was cancelled because of the COVID-19 pandemic but up to 32,000 fans are allowed in each day this year as part of a government test event and warm applause rippled around the links course under clear skies.

Willett, the 2016 Masters champion, mixed two birdies and two bogeys on the front nine before picking up three shots over the closing holes.

“To be able to be clapped onto every tee, every green makes a big difference in this game and it's been fantastic to have them back.”

Dustin Johnson has good memories of Royal St George's after finishing tied second at the 2011 British Open and the world number one is confident of ...
Sport
2 weeks ago

American Brooks Koepka, a four-times major champion, started with a solid 69, but it was a tough morning for 2020 US Open champion Bryson DeChambeau.

World number one Dustin Johnson was level par through 10 holes and Norwegian Viktor Hovland started with a 68 to finish two under.

Defending champion Shane Lowry of Ireland struggled to two over playing with former British Open winner Louis Oosthuizen of SA and Spanish U.S. Open champion Jon Rahm, whose solid start was spoiled by a double bogey at the ninth.

Richard Bland was given the honour of hitting the opening shot of the tournament and the Englishman, who won his first European PGA Tour title this season at the 478th attempt, struck his drive straight down the fairway.

“It was very special, very nerve-racking,” Bland told reporters. “This is what it's all about. The nerves definitely sort of cranked up a little bit and I was glad to hit one in the fairway.”