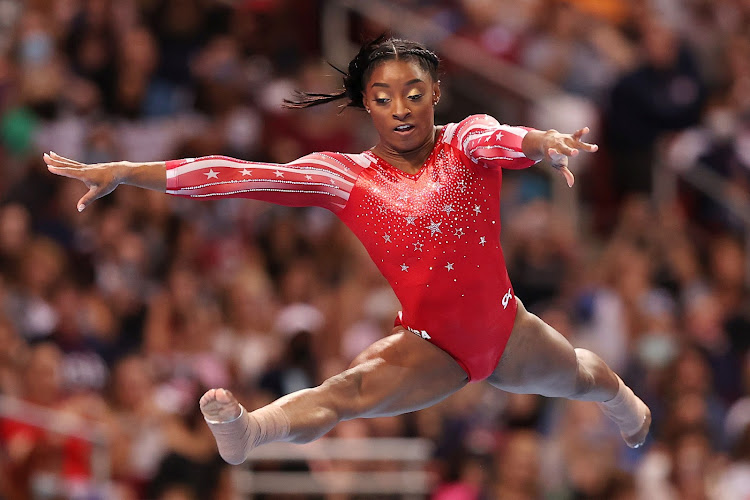 Simone Biles competes in the floor exercise during the Women's competition of the US Gymnastics Olympic Trials at America’s Center on June 27, 2021 in St Louis, Missouri.
Image: GETTY IMAGES/ CARMEN MANDATO

Simone Biles may be only 142 centimetres tall, but she casts a giant shadow over the Tokyo Olympics where she is set to reassert her absolute dominance of women's gymnastics.

The 24-year-old American, widely considered the best gymnast of all time, is perhaps the most outstanding athlete not only in her sport but in the world right now.

Biles – who won five medals, including four golds, at the 2016 Rio Olympics – currently has 30 combined world championship and Olympic medals. She is expected to break Larisa Latynina's record of 32 in Tokyo.

The United States, which have not lost a team event final at the Olympics or the world championships since 2010, also feature 18-year-old Sunisa Lee, a 2019 world medallist in the floor exercise and uneven bars.

Gymnasts in Tokyo show how Olympics can pass coronavirus challenges

Gymnasts from four nations tumbled, leapt and spun through a friendly meet in Tokyo on Sunday in a closely-watched event aimed at showing the world ...
Sport
8 months ago

With a solid performance at the U.S. trials, Lee established herself as a favourite for the silver medal in the all-around.

The Russians and Chinese, who have worked to narrow the gap with the United States in recent years, are rivals for the silver in the team event.

The Russian team, competing without their flag and anthem because of doping sanctions, is comprised of a talented new generation of gymnasts who would not have met age eligibility criteria had the Games been held last year, including 16-year-olds Viktoria Listunova and Vladislava Urazova, who only recently made their senior debuts.

Listunova, the European all-around champion, is a candidate for the podium in the all-around in Tokyo. But the competition among Listunova, Urazova and 20-year-old Angelina Melnikova will be stiff because only two gymnasts from each country can qualify for the all-around final.

Leaps of Faith: SA’s first gymnastics champ is off to the Olympics

The physical and social price Caitlin Rooskrantz pays is daunting, but she wouldn’t have it any other way
Sport
1 year ago

The Russian team are strong on the uneven bars, and Melnikova, who won silver in the team event at Rio, could also win a medal on the floor exercise behind Biles. The Russians have struggled at their national championship on the beam and need a solid performance to finish ahead of China.

The veteran Chinese team will look to rebound after winning only one medal, a bronze, in the team event in Rio.

Eighteen-year-old Tang Xijing, the all-round silver medallist at the 2019 world championships, will lead the team with her poise and consistency.

Ou Yushan could score high in the all-around, and Lu Yufei could prove a threat after recently increasing the difficulty in her routines.

Mother-of-four diving into an Olympic comeback

If you are Laura Wilkinson, a 42-year-old mother making your return to competitive diving after undergoing spinal fusion surgery, a year delay in the ...
Sport
1 year ago

Zhang Jin, 20, has been solid on the beam and could also help boost China on the floor exercise and the vault.