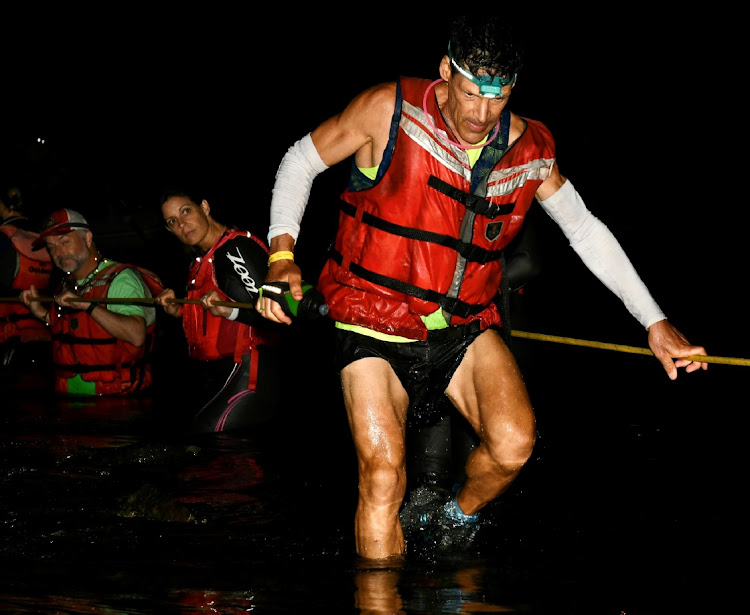 As one of the most accomplished endurance athletes of all time, a man who knocked off 50 marathons in 50 US states in 50 days, it is somehow reassuring to the mere mortal to see that Dean Karnazes can still make the most basic of rookie mistakes.

Karnazes is widely credited with helping fuel the rise of ultra-distance running through his million-selling 2006 book “Ultramarathon Man”.

He has since published several more books and has an extraordinary record that includes 350 miles in 80 hours without sleep, 3,000 miles across the US, 148 miles in 24 hours on a treadmill and countless race victories, including twice winning the 135 mile Badwater Marathon across Death Valley.

How he has learned to embrace this stage in his remarkable career as he turns 59 next month is described in forensic and moving detail in his latest book, “A Runner's High - Older, Wiser, Slower, Stronger”.

Ostensibly it is the story of his return to the Western States 100 miler in rugged California terrain, one of the toughest events on the calendar.

It is far more than a dry racing diary, however, as it delves into his internal motivations and how the remarkable support of his friends and family have been so essential to his continuing success.

“I really put an emphasis on trying to capture the emotions that my family and I have experienced over almost three decades of doing this together,” Karnazes told Reuters in an interview.

“That support has been the foundation of my running career. They've been along with me from the get-go and we've shared so many memories that I couldn't imagine doing what I've done without them.”

The book has a great section on how Karnazes doubted his seemingly uninterested 18-year-old son's ability to fulfil a vital support role at Western States, but then found himself astounded at how proficient he was come race day.

“I'd never seen that side of him before and it was quite beautiful,” Karnazes said after his son dismissed his worries that he was no longer able to challenge at the sharp end by saying: “Dad, you're running 100 miles, that's kind of enough.”

SA athlete Irvette Van Zyl was the first female runner to cross the finish line in the women's race in the Nedbank Runified Breaking Barriers 50km in ...
Sport
2 months ago

Despite all those years of wisdom, Karnazes shows in the book that he can still make inexplicably stupid, and potentially dangerous, decisions, highlighted by his failure to carry anything like enough water for a baking hot 100km warm-up race.

“In many years of doing this I think there's something at play deeper than my conscious mind,” he said when trying to explain a fundamental error that even a first-timer would be embarrassed about.

“Of course I know what to do but I just threw myself into this challenge completely unprepared and wanted to see how it would go and I think that keeps it mysterious and intriguing.

“Everything in this world is so measured and calculated and quantified and to just go do something random like that and to see how it goes in racing is just something refreshing.”

Out of water, boiled by the sun and bruised from a fall, Karnazes explained he found solace in the endurance athlete's internal mantra of “just keep moving” to complete the race.

“It's crazy to do that when you're running a 100 mile race but I really have to break it down to that level of granularity. If you are thinking about how much further you've got to go it will crush you.”

When he did his 50 back-to-back marathons in 2006 he said his targets became even smaller.

“I remember after marathon 19 I could barely get out of bed in the morning, let alone think about running another marathon,” he said.

“So I thought: 'Just get to the sink in the hotel room, just lace up one shoe, then the other, then somehow get to the start line. It's baby steps but each one moves you towards your target, even if it's impossible to see it.'”

Back in the desert at the Western States 100 event, Karnazes had to deal with the twin challenge of an astonishingly gruelling course and, 24 years after first tearing up the race, learning how to park his ego.

“I can't compete at the level I once did and it can be frustrating sometimes when people I've been passing for years are now passing me,” he said.

In the cool evening breeze, at 10pm on a Friday evening in Kenton-on-Sea, eight ultra distance runners began the inaugural Kenton 100 Miler – a ...
Sport
8 months ago

“But one of the things I love about ultrarunning is that though the winners get recognition and praise, we also celebrate the people at the back.

“Watch the video of this year's last-place finisher at Western States as this poor, delirious guy somehow got across the finish line after 30 hours with just seconds to spare – wow, what a moment of human triumph.

“The front end is getting more elite and that's exciting but I also hope that kind of funky magic of the sport's grassroots doesn't go away.”