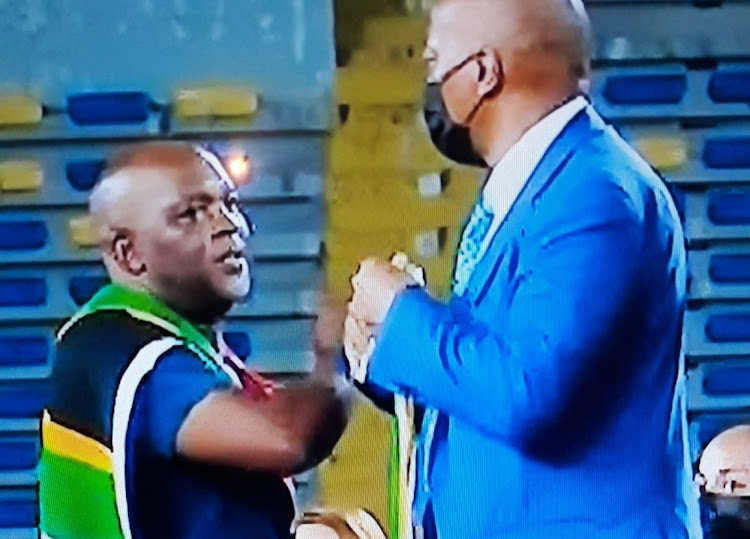 Pitso Mosimane and his former boss Patrice Motsepe share an elbow bump during the presentation of the Caf Champions League trophy.
Image: TWITTER

A red card, three goals and an “awkward moment” between a coach and his former boss – Saturday night’s Caf Champions League final was packed with drama.

The Soweto giants held out for the first 45 minutes before Happy Mashiane was shown red in first-half added time. Defending champions Al Ahly sensed blood and finished off their opponents in the second half, netting three goals in 21 minutes.

Al Ahly were hungrier for their 10th Caf Champions League final‚ and ultimately the class of a team who had convincingly reached the final showed ...
Sport
6 months ago

While many in Egypt were celebrating the win, Al Ahly coach Pitso Mosimane and his charges walked up to collect their trophy, right past Caf president and his former boss Patrice Motsepe.

Mosimane‚ who became the second-highest winning coach in the competition with his third title‚ walked up to Motsepe, elbow bumped him and bowed his head when given his winner’s medal.

He then left with a distracted and slightly uncomfortable look on his face.

It was extremely awkward! pic.twitter.com/ucZIVbZTSC

Mosimane has been embroiled in a tense standoff with his former club for months. His representatives revealed in May they received summons from Sundowns demanding to be paid back commission fees related to the coach.

He left the club in September last year to join Al Ahly, just months after extending his contract.

The decision apparently did not go down very well at Chloorkop and the tension between the two parties has been brewing since.

Mosimane was insulted by Sundowns supporters earlier this year ahead of Al Ahly’s Champions League quarterfinal against his former club, and suggested a club official had allowed it to happen.

“They (the supporters) stopped the bus. All these people swearing at me‚ swearing at my mother. I said to myself: ‘What else should I have done for this team (Sundowns) to get the respect.’ But it’s football‚ I understand. And I know the person who did that‚ and the person who’s behind that — just bitter because I left. I had to move on with my life”.