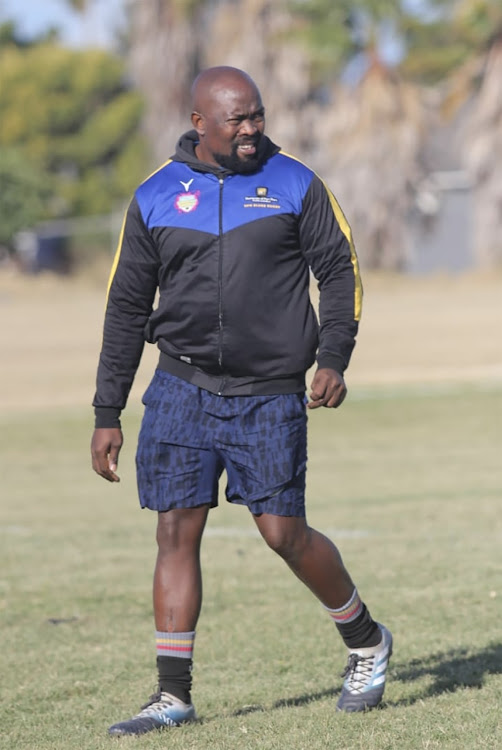 DISAPPOINTED: Border Bulldogs coach Lumumba Currie is not happy with how his team performed in the first half.
Image: RANDELL ROSKRUGE

Head coach Lumumba Currie was left dumbfounded after the Border Bulldogs crashed to a 50-29 defeat at the hands of SWD Eagles in the Currie Cup First Division on Friday.

A 24-3 deficit at halftime laid the foundation for the Eagles to achieve a comprehensive victory.

The scoreboard left Currie scratching his head, especially after his team had done so well in their win over the EP Elephants.

Border drew first blood in the first half through a penalty goal from Litha Nkula, but from there on in it was an onslaught from SWD, the side from George running in four tries before halftime.

Currie cut a deflated figure when giving an account of the first stanza display in his post-match interview.

Confident Bulldogs have Eagles in their sights

Lumumba Currie's side is fresh off a win over their provincial rivals EP Elephants which was their first win of the season. They want to build on ...
Sport
2 weeks ago

“The first half, to be honest, is where we lost the game. We lost the game by not doing what we were supposed to do,” Currie said.

“We never put the opposition under pressure in the first half. Yes, we looked threatening; there were two line breaks that we had and they were supposed to be 14 points, but the decisions in the last two passes were a problem.

“We could have gone to the interval with 20 points. It was a challenge for us.

“SWD wanted it more than us; they gave it their best shot from the first whistle.

“The difference between us and them: They looked sharp, all they wanted to do is go over the try line, and they kept us at bay,” Currie said.

While continuing to dissect their uninspired first-half showing, Currie said his side had lacked discipline in execution and decision making, something he had been trying to get across his players this season.

“It becomes a disciplinary issue, such as decisions of not releasing the ball, or trying to kick whereas there was no need to kick, you could have kept possession and moved to another phase.

“In the first half it was our own doing, hence we had that type of result and it became very difficult to come back.

In the second half the Bulldogs gave an improved performance and managed to match SWD blow-by-blow , each team scoring four tries.

The Bulldogs got their first win of the season when they defeated EP 41-20 at Police Park. The win which was also observed by fans standing outside ...
Sport
2 weeks ago

Those four tries got the Bulldogs a log point, leaving them with six points on the table, level with SWD and the EP Elephants.

Currie did commend the attitude shown in the second stanza, even though it was a little too late.

“The belief was there in the second half. The game is not over until the last minute, hence we were able to get 26 points. It wasn't fluke or luck, we worked for them, we worked very hard for them.

“That shows that if we play we can be devastating.

“We only took a decision in the last 20-25 minutes to play. That’s where we started playing and were able to put the opposition under pressure.”