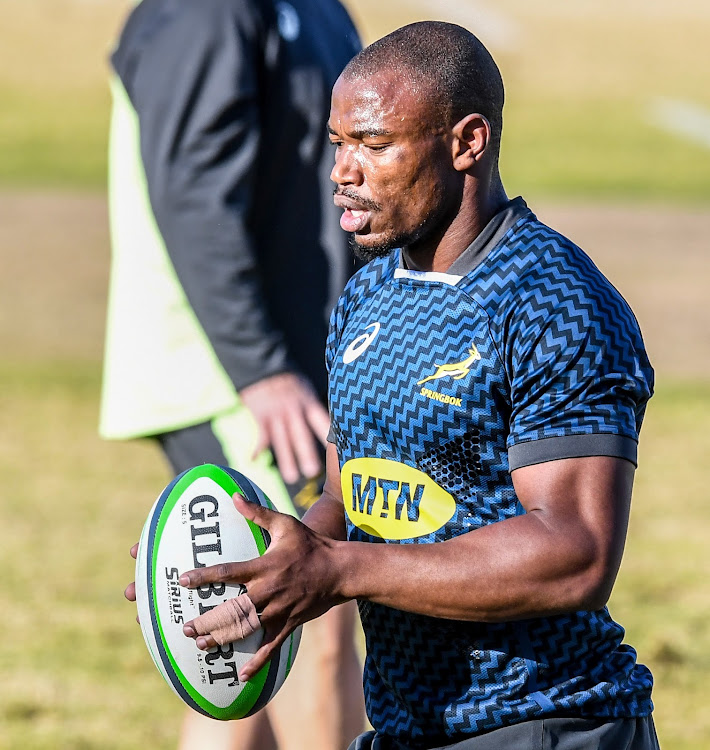 BACK IN ACTION: Makazole Mapimpi during a Springbok training session ahead of the first Test in Cape Town.
Image: GALLO IMAGES / SYDNEY SESHIBEDI

The dazzling World Cup winning duo of Siya Kolisi and Makazole Mapimpi have won their battle against Covid-19 and will line up for the Springboks against the British & Irish Lions on Saturday.

Bok coach Jacques Nienaber said the return of Kolisi and Mapimpi was a huge boost for his team because they would be able to absorb the pressure of a high stakes showdown at the Cape Town Stadium (kickoff 6pm).

“It was very important for us to have Siya back for this Test,” Nienaber said.

“He knows our structures and knows what we want to do from an on-field perspective.

“He has been our captain and he will be bring calmness to the squad.

“We are very happy to have him back.

“The players with experience of playing in a World Cup final will be vital for us.

“We have guys who have been there before who will understand the pressure there will be in a huge game.

“These players have felt this before and been exposed to it.”

Kolisi, Mapimpi and prop Ox Nche were the last group of players to report for duty at the Springbok camp in Cape Town on Monday after completing mandatory self-isolation in Johannesburg.

Nienaber selected 11 of the 15 players who started the 2019 World Cup final against England.

Kolisi played in the warm-up Test against Georgia on July 2 but Mapimpi’s last Test cap was more than 20 months ago.

The match will have extra significance for Bok pivot Handre Pollard who will earn his 50th cap on Saturday.

President Cyril Ramaphosa said on Saturday 161 shopping centres and malls were destroyed in Gauteng and KwaZulu-Natal.
Sport
2 weeks ago

Nienaber said player welfare was paramount when the team was selected.

“Some of the players didn’t have symptoms at all; they have been managed according to their individual needs, and they have really impressed me with their intensity and enthusiasm at training,” he said.

“The wellbeing of our players is of paramount importance, so we have been working closely with the medical team to work out what would be the best course of action for each player over the three-Test series.

“There are over 500 Test caps in the starting line-up and that is what we are looking for in terms of experience.

“The forward battle is going to be as tough as it gets, so it’s important that we pitch up physically and ensure that we make our presence felt in the set pieces and at the contact points.

“The Lions hard-running backs will test our defensive system, but we have been looking forward to these matches since the Rugby World Cup concluded and we have done our homework, so it is a case of doing everything at 100% and sticking to our structures.

“SA have played three matches in the last few weeks with the Springboks facing Georgia and SA ‘A’ lining up against the British & Irish Lions and the Vodacom Bulls, and the first two matches in particular allowed us to settle a few player combinations that haven’t played since the Rugby World Cup final,” Nienaber said.

“We planned our team selections carefully, which is why it was important for us to play a third match after the second Test against Georgia was cancelled. We know what the players we selected can do.

“The fact that most of the players participated in the Rugby World Cup means they know one another well on and off the field, and as coaches we know what they have to offer after having worked with most of them for several years.”