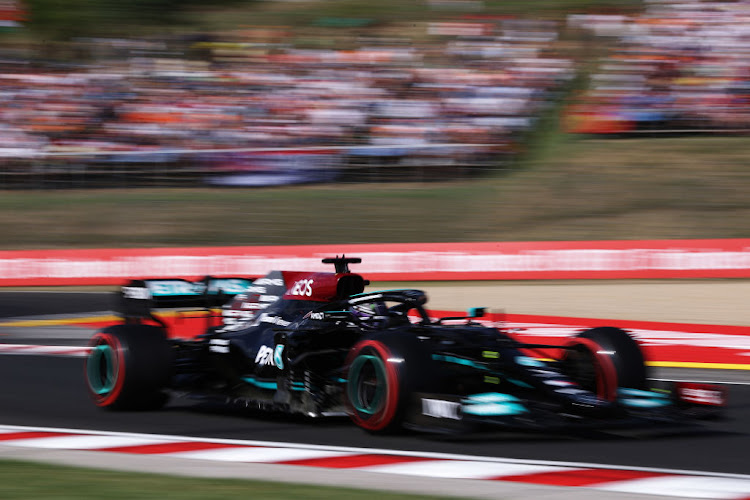 Lewis Hamilton during qualifying ahead of the F1 Grand Prix of Hungary at Hungaroring on July 31, 2021 in Budapest, Hungary.
Image: Lars Baron/Getty Images

“I think its been amazing teamwork from everyone this weekend,” said Hamilton, after chalking up his 101st career pole and first in six races.

“It’s been amazing to see everyone coming together, rallying up and pushing forward,” the Briton, gunning for a landmark 100th win and record ninth at the circuit on Sunday, added.

Verstappen, who leads Hamilton by eight points in the overall standings, was disappointed to miss out on a fifth successive pole.

“Clearly, the whole weekend so far we’ve been a bit behind and it showed again in qualifying,” said the 23-year-old, whose rivalry with Hamilton stepped up a gear after a collision with the Mercedes driver put him out of the last race in Britain.

“Nevertheless we’re still there and we’ll see what we can do,” said the Dutchman, who will be starting Sunday’s race on the grippier but less durable soft tyres compared to Hamilton’s mediums.

The hour-long session was briefly halted in the second phase when Ferrari’s Carlos Sainz spun off into the barriers at the last corner. The Spaniard, fourth in the opening part of qualifying on a strong weekend for the Maranello-based squad, will start 15th.

Mick Schumacher did not take part in qualifying with his Haas team unable to repair his car in time after the German’s crash in final practice earlier on Saturday. He was also hit with a five-place grid penalty for an unscheduled gearbox change after Haas were forced to replace it due to damage sustained in the incident.