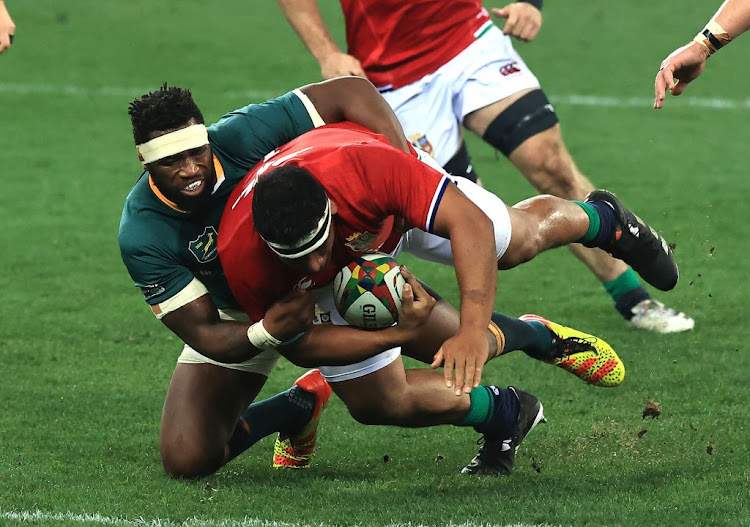 For a player whose preparation for the series had been reduced to a drip due to Covid-19 protocols, Siya Kolisi proved to be both Captain Courageous and Contagious in the second Test against the British & Irish Lions in Cape Town.

Kolisi, who demanded equal access to the ear of the referee in the build-up, commanded the attention of all who watched him steer the Springboks to a series-levelling 27-9 win in Cape Town Stadium.

His work rate was infectious.

It rubbed off on his comrades, who to be fair did not need a lot of motivation to start with. He spread his influence across the field making telling incursions and interventions, none more timely than when he, in concert with Lukhanyo Am, denied Robbie Henshaw a try in the first half.

It was one of Kolisi's more forceful performances in the Springbok jersey and heaven knows what he and his teammates will inflict on the Lions now that they have another game under the belt?

Much like the Lions in the first Test, the Springboks developed a spring in their step in the second half as the full toll of their forward heavy Bomb Squad bench took effect.

Coupled to that, the Boks were far more tactically savvy by not playing into the Lions' hands as they did a week earlier. They chose more carefully the moments to send the ball skyward with the ambition of retrieving it.

The Springboks capped a week in which we ruefully had to remind ourselves this series required a 12-year wait, by delivering a performance in which ...
Sport
11 months ago

Faf de Klerk put the ball on the proverbial 'tiekie', Handré Pollard probed and prodded behind the rush defence, while Willie le Roux and even Makazole Mapimpi found the solace of touch with prodigious punts.

Though the Bok line-out was a bit wobbly in the first half when the Lions were able to apply a spoiling hand, touch ultimately proved a useful ally for the hosts.

In the second half the addition of Lood de Jager to the second row vacated by Franco Mostert, who moved to flank, gave the Boks the aerial elasticity from which to launch their much vaunted maul. It is peculiar for a starting player to become more influential when the game enters its final quarter, but that is the optical defiance Mostert is capable of. He jumps like a springbok, runs like a giraffe and defends like a guardian her cubs.

If Eben Etzebeth wasn't in the Lions' faces he frenziedly tore into red clad torso and lower limb, as did Jasper Wiese who is yet, perhaps, to fully grasp the demands of a Test No8.

Kolisi felt disrespected: ‘I felt I wasn’t given the same access to the referee’

The bulk of Bok captain Siya Kolisi and assistant-coach Mzwandile Stick’s online media session was dedicated to the now tit-for-tat verbal jabs being ...
Sport
11 months ago

A fact often overlooked, is that when the shadows are long it isn't just the blunt bludgeoning of the Bomb Squad that pulverised the opposition. In Am and Damian de Allende the Boks have centres who effectively operate like auxiliary loose forwards at the breakdown. In defence, if one doesn't get you, the other does.

Mapimpi started the series with questions around his battle readiness after Covid-19-enforced isolation. He has come in from the cold and conclusively answered in the affirmation. He delivered a performance as incisive and decisive as the one he produced in the most recent Rugby World Cup final.

There will, however, be concern over the fitness of Pieter-Steph du Toit going into the final Test. Du Toit, who was injured inside the first six minutes on Saturday, soldiered on with a shoulder injury until after the 20-minute mark.

Even in his absence, Kolisi and the Springboks have the momentum going into the deciding Test and it is time for the Lions to take a long hard look in the mirror.